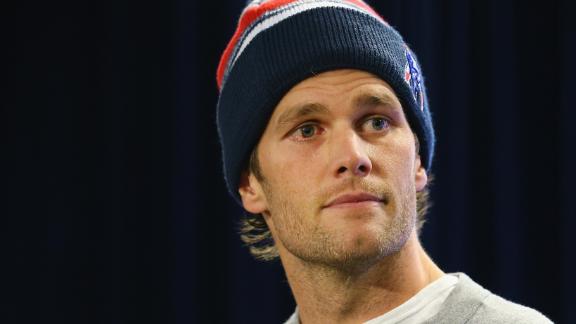 Tom Brady told ESPN on Sunday that he hasn't yet spoken to NFL investigators regarding the allegations of the New England Patriots using underinflated footballs in the first half of the AFC Championship Game and expects that to happen after the season is completed.

The Patriots quarterback made his comments in an interview with ESPN's Chris Berman that aired during halftime of Sunday night's Pro Bowl, which was televised by ESPN.

"No, no. I believe they're going to do after the season, so we'll deal with it after this game," Brady said when asked if he had been contacted personally about the underinflated footballs.

"I think everybody's locked in, ready to go for this Super Bowl. It's a great opportunity for us, you know, and our guys have worked really hard so, hopefully we can go out there and play our best on Sunday."

Brady was asked if the investigation has affected the team's preparation in any way.

"I certainly hope not. I think we're a pretty mentally tough team, and I think we've dealt with other things in the past," Brady said. "I think coach [Bill Belichick] has always said 'ignore the noise' and we have to focus on the task at hand, which is a greatSeahawksteam. I'm excited to play in another Super Bowl. You don't get many of these opportunities in your life. ... We finished our last practice [Sunday] here in Foxborough and we headout [Monday] to Phoenix, so it will be good to get there and get into the week. I think we feel good about where we're at."

Brady was also complimentary of Seahawks quarterbackRussell Wilson, saying he is "like Barry Sanders back there, but he can throw."

In a news conference on Thursday that lasted a little more than 30 minutes, Brady detailed how he selected 24 footballs for referees to inspect before Sunday's AFC Championship Game against the Indianapolis Colts and said he "didn't alter the ball in any way."

The NFL found that 11 of the Patriots' 12 game balls from their 45-7 win over the Colts were inflated significantly below the NFL's requirements, league sources involved and familiar with the investigation of Sunday's game told ESPN's Chris Mortensen.

The NFL on Friday released a statement on their investigation, saying they had conducted nearly 40 interviews to that point. Patriots wide receiver Matthew Slater said Saturday that the NFL Players Association has advised Patriots players not to discuss the ongoing investigation.

Also on Saturday, Belichick detailed the organization's preparation process and suggested that weather conditions may have affected the air pressure in the footballs. The longtime Patriots coach emotionally defended his team, saying, "We did everything as right as we can do it."

Brady: NFL Hasn't Contacted Me
In an interview with Chris Berman, Tom Brady disclosed that he hasn't yet spoken to NFL investigators regarding the allegations of the Patriots using underinflated footballs in New England's playoff victory against the Colts.

Sherman: NFL Won't Punish Patriots
Seahawks cornerback Richard Sherman explained why he doesn't think the NFL will punish the Patriots for having underinflated footballs during their playoff victory against the Colts.