Todd Bowles on Geno Smith's activity: 'He shouldn't be doing it right now' 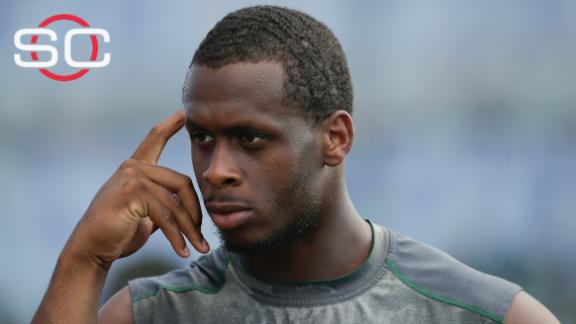 FLORHAM PARK, N.J. -- New York Jets quarterback Geno Smith was reprimanded by the organization Sunday for playing catch with a friend only two days after surgery to repair a fractured jaw, disobeying an edict to avoid physical activity.

"He shouldn't be doing it right now," coach Todd Bowles said after practice. "We handled that internally. We had that discussion."

Bowles said he was concerned because Smith "just got surgery. You don't want it infected."

Smith wasn't disciplined by the team, according to Bowles.

The Jets' former starter, who was punched in the face last Tuesday in a locker room altercation with then-teammate IK Enemkpali, was photographed shirtless on Saturday by the New York Post. He was throwing to a friend at his apartment complex a few miles from the Jets' facility.

The newspaper said Smith was wearing eye black, which seemed odd, but they were actually bandages under each eye, according to the team.

Smith apparently didn't see anything wrong with his throwing session, telling the Post, "I feel great. You see me throwing, right? ... Get ready for me to come back."

The Jets weren't amused by Smith's unsupervised throwing session, summoning him to the facility on Sunday.

"[The doctors] said he couldn't do anything physical," Bowles said.

Bowles didn't speak directly to Smith, who was examined by the medical staff, but it's believed that general manager Mike Maccagnan expressed the organization's position in a sit-down with Smith.

Smith didn't stick around to watch practice. He apparently didn't stay to socialize with teammates, some of whom said they didn't see him.

The third-year quarterback isn't ready to be at the facility on a full-time basis, the team said. For now, he's showing up for checkups but not attending meetings.

"It's not disappointing. It's just something you don't want to do, and we addressed it," Bowles said of Smith's football toss.

Aside from infection, Smith put himself at risk for re-injuring himself. There was always the chance of tripping or getting hit in the face with the ball.

Smith's jaw, fractured in two places by one punch, required the implantation of metal plates and screws. The surgery was on Thursday and he spent a night in the hospital. His jaw wasn't wired shut, which some medical experts see as a positive, but that won't have any effect on his recovery, Bowles said. The Jets still expect him to miss six to 10 weeks.

This is yet another incident that raises questions about Smith's maturity. A year ago, he was criticized for missing a team meeting and cursing out a fan, resulting in a fine by the league.

Despite an uneven season, Smith went into training camp as the starter, earning praise from teammates for his new attitude. Then came the Enemkpali incident.

Bowles called it a "sucker punch" and immediately released Enemkpali, who was claimed on waivers by the Buffalo Bills and former Jets coach Rex Ryan. But details have emerged showing that Smith may have provoked Enemkpali by pointing his finger in his face.

Their dispute was over $600 that Smith owed to Enemkpali, traveling expenses to attend Enemkpali's football camp last month. Enemkpali laid out the money, but Smith wasn't able to attend and promised to repay him.

Smith declined to discuss the incident in a brief interview with the Post. He threatened to call the police if the reporters didn't leave the "private property."

Meanwhile, veteran Ryan Fitzpatrick has stepped into the starting quarterback role. It's his job to lose, raising questions about Smith's long-term future with the team.

Enemkpali already has debuted with the Bills. After Friday night's game, he said a number of former teammates have called to wish him well.

"They called to see how I'm doing and called to check on me," he said.