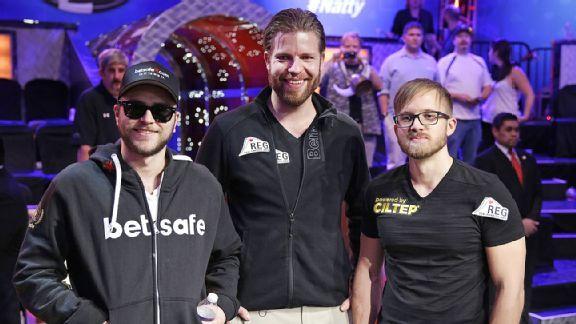 LAS VEGAS -- There will be no chants of "USA" when the final three players vying for the World Series of Poker's $10 million top prize return to a Las Vegas stage Tuesday night.

The bluffing and betting battles resume at 5:30 p.m. Tuesday, and play will continue until a winner is crowned.

Jorryt van Hoof of the Netherlands dominated most of the 12 hours of poker with larger towers of chips than his foes at the table.

He remained in a healthy position going into Tuesday night with one-third more chips than Martin Jacobson of Sweden and nearly double the total of Felix Stephensen of Norway.

"It should be a fun battle," Jacobson said of the three-man matchup. As for getting this far, "patience is key in tournament poker. You need to know how to pick your spots, and it's something I've gotten a bit better at over the years," he said of his game play earlier in the day.

The Swedish player had a strategy to drown out the cheering, singing and general noise: earplugs.

"I was in a vacuum. I was able to focus a lot better that way," he said.

Stephensen said that to get the big prize, "I guess you gotta play pretty good, get pretty lucky, and hopefully everything falls into place."

Stephensen knows a thing or two about luck. He paid to play in the World Series of Poker after winning an unlikely bet on the World Cup that the Netherlands would beat Australia 3-2.

One of the three will win the $10 million top prize.

The second- and third-place finishers get $5.1 million and $3.8 million, respectively.

The three outlasted six other competitors at the final table.

Mark Newhouse, 29, achieved the rare feat of winning a seat among the final nine players two years in a row but, like last year, was the first eliminated.

More than two hours later, Brazilian Bruno Politano, 32, fell to a winning pair of sevens, and the theater at the Rio All-Suite Hotel & Casino lost the loudest and largest cheering section.

Dan Sindelar, a native of Nebraska who now lives in Las Vegas, followed Politano when he needed a jack of spades and got a queen of spades instead.

The youngest player at the table, 22-year-old Andoni Larrabe from Spain, was the fourth player to go home.

Foosball champion and fan favorite 30-year-old Billy Pappaconstantinou had come back as a player to be reckoned with, but his chip stack diminished quickly when he was among the final five players.

Pappaconstantinou had lost all but $50,000 of his chips when he went all-in against the 27-year-old Jacobson and bowed to his three-of-a-kind. He went all in again the second time, but even with a pair of sevens to start, he couldn't outdo chip leader van Hoof's pair of jacks.

William Tonking, who got his start playing online poker, was the last one out early Tuesday, placing fourth out of nine.

Van Hoof, the leader going into Tuesday night, said he would prepare with some sleep.

"I've been good at that the past few months," he said. "So I intend to do that one more night. Then the nights after I will sleep a little less and party a little more."

The overall tournament spans seven weeks in June and July and has attracted close to 80,000 people who played (and paid with hefty buy-ins) to win in 65 events.