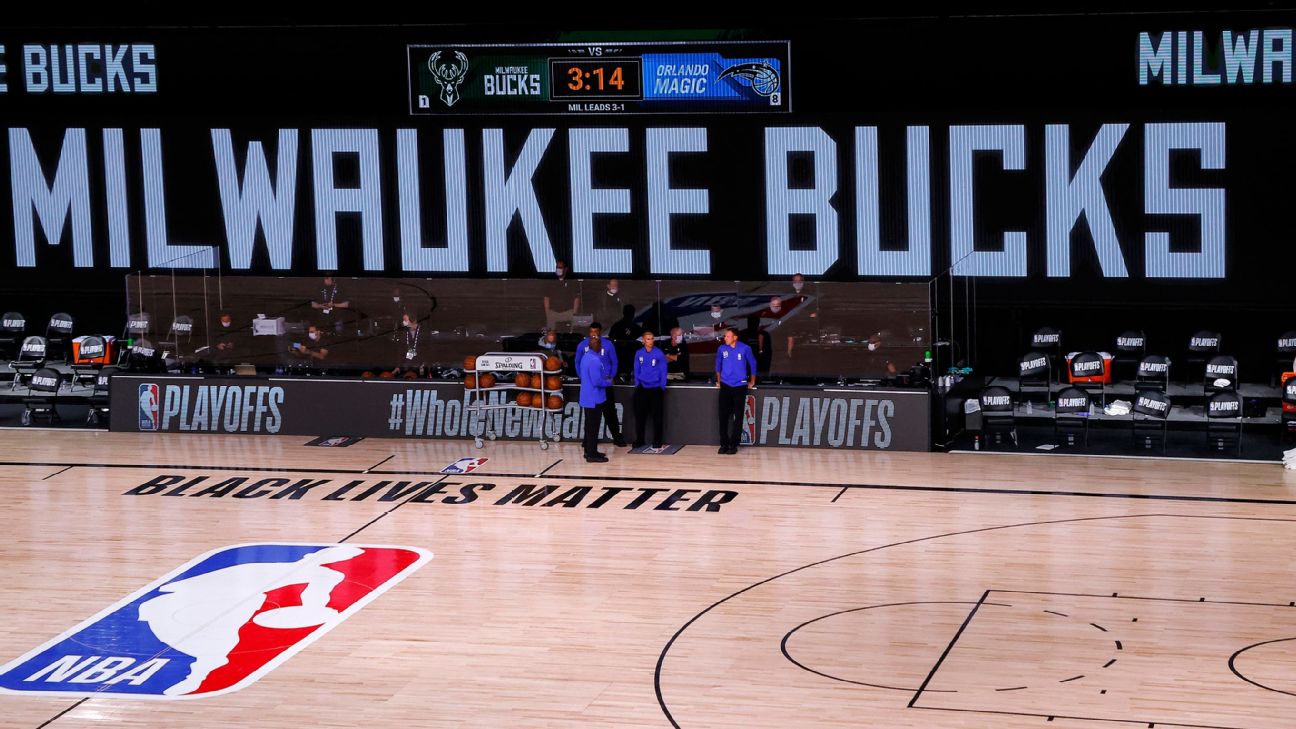 LAKE BUENA VISTA, Fla. -- The Milwaukee Bucks' decision to not take the floor for Game 5 of their first-round playoff series against the Orlando Magic prompted the NBA to postpone all three games scheduled for Wednesday.

Milwaukee is about 40 miles north of Kenosha, Wisconsin, the city where 29-year-old Jacob Blake, a Black man, was shot seven times by police on Sunday. Blake was shot as he attempted to enter the driver's side door of his vehicle with three of his children inside. Video of the shooting was distributed on social media.

"We fully support our players and the decision they made. Although we did not know beforehand, we would have wholeheartedly agreed with them. The only way to bring change is to shine a light on the racial injustices that are happening in front of us. Our players have done that and we will continue to stand alongside them and demand accountability and change," the Bucks said in a statement.

Later, the players issued a statement saying:"The past four months have shed a light on the ongoing racial injustices facing our African-American communities. Citizens around the country have used their voices and platforms to speak out against these wrongdoings.

"Over the last few days in our home state of Wisconsin, we've seen the horrendous video of Jacob Blake being shot in the back seven times by a police officer in Kenosha, and the additional shooting of protestors. Despite the overwhelming plea for change, there has been no action, so our focus today cannot be on basketball.

"When we take the court and represent Milwaukee and Wisconsin, we are expected to play at a high level, give maximum effort and hold each other accountable. We hold ourselves to that standard, and in this moment, we are demanding the same from our lawmakers and law enforcement."

Every NBA player and coach was invited to join an 8 p.m. ET meeting in the NBA bubble to discuss how they'll proceed from Wednesday's decisions, sources told ESPN's Adrian Wojnarowski and Zach Lowe. Before a packed room of teams in a hotel ballroom at Disney, the discussion centered on whether to continue with the playoffs -- or end the season, sources told ESPN.

There seemed to be momentum not to play the three playoff games on Thursday, but nothing had been decided.

Emotions are raw, players already were worn out in the bubble environment before the Blake shooting, and the sources said that any discussions within teams are ongoing about postponing Thursday's three games, too -- and beyond.

"The season is in jeopardy," one veteran player in the bubble told ESPN. Wednesday night's meeting with players will go a long way toward determining how the players will move forward with the rest of season, sources told ESPN.

The NBA has scheduled a special board of governors meeting on Thursday morning, sources told Wojnarowski.

The Bucks, who were scheduled to play the Magic at AdventHealth Arena inside the NBA's bubble at the Walt Disney World Resort at 4 p.m. ET on Wednesday, refused to leave their locker room before the game, as league officials huddled outside of it.

Some players, including center Brook Lopez, worked out before the game. But when it came time for the team to take the floor at around 15 minutes before tipoff, as is customary for an NBA game, only Orlando's players, as well as the referees scheduled to work Wednesday's game, showed up. There was no activity from Milwaukee's side of the court.


Then, with just a few minutes left on the game clock before the scheduled tip time, the Magic players slowly walked off the court and returned to their locker room, leaving only the four game referees. Eventually, Monty McCutchen, the NBA's vice president of refereeing and training, told them to leave the floor as well.

Shortly thereafter, the game balls were removed, as were the various accessories on both sides -- such as the name plates for each player's assigned seat and the cushions on which some of them sit.

"Today we stand united with the NBA Office, the National Basketball Players Association, the Milwaukee Bucks and the rest of the league condemning bigotry, racial injustice and the unwarranted use of violence by police against people of color," the Magic and the DeVos family, which owns the franchise, said in a statement.

The Magic also issued a statement fromMichael Carter-Williams, on behalf of the team, expressing solidarity with the Bucks while admitting that they did not know what was planned before the game.

"We weren't given advanced notice about the decision but we are happy to stand in solidarity with Milwaukee, Jacob, and the entire NBA community," Carter-Williams said in the statement. "Change is coming."

NBPA executive director Michele Roberts issued a statement saying in part: "The Players have, once again, made it clear -- they will not be silent on this issue. We stand with the decision of the players of the Milwaukee Bucks to protest this injustice and support the collective decision to postpone all of today's games."

President Barack Obama tweeted: "I commend the players on the @Bucks for standing up for what they believe in, coaches like @DocRivers, and the @NBA and @WNBA for setting an example. It's going to take all our institutions to stand up for our values."

Democratic presidential candidate Joe Biden issued a statement Wednesday night, saying, "This moment demands moral leadership. And these players answered by standing up, speaking out, and using their platform for good. Now is not the time for silence."

After the Bucks made their decision to sit Wednesday, players from around the league tweeted their support. LeBron James tweeted in all capital letters: "F--- THIS MAN!!!! WE DEMAND CHANGE. SICK OF IT."

Others to tweet from inside the bubble included the Utah Jazz's Donovan Mitchell and the Denver Nuggets' Jamal Murray.

They also were shown support by Alex Lasry, a senior vice president with the Bucks and the son of owner Marc Lasry.

The NBA's referees also tweeted out their support of the players.

The first talk of a possible boycott of a game came from the Toronto Raptors on Tuesday, when guardFred VanVleetexpressed the possibility during his media availability. Both the Raptors and the Boston Celtics had players-only meetings Tuesday night to discuss the possibility of a boycott, and are planning to meet again Wednesday night to further discuss the matter. Both teams are staying at the same hotel, in addition to preparing for the potential start of their playoff series Thursday night.


Major League Baseball's Milwaukee Brewers and Cincinnati Reds did not play their game at Miller Park, and the Seattle Mariners did not play their scheduled game against the host San Diego Padres. The Dodgers-Giantsgame in San Francisco was also postponed, sources told ESPN's Jeff Passan. Some players, including the Chicago Cubs' Jason Heyward and the Colorado Rockies' Matt Kemp, sat out their games with the support of management.

From the moment the NBA and the National Basketball Players Association agreed to create the bubble, attempts to address the ongoing issues of police brutality, social justice and racial inequality in American society have been top of mind. The words "Black Lives Matter" are painted on all three of the courts used at ESPN's Wide World of Sports Complex, and players are wearing "Black Lives Matter" warm-up shirts before every game. The vast majority of players around the league are wearing one of a series of words or phrases that were agreed upon to promote positive change in society.

Coaches, players and referees are kneeling in solidarity during the national anthem before games. Coaches are wearing pins that say "Coaches Against Racial Inequality" on them, and both the players and coaches have actively used their time with the media to speak about issues outside of basketball.

But as the week has progressed, there has been a palpable sense of frustration among players around the league about the fact that incidents like the Blake shooting on Sunday continue to take place.

None voiced that more than Hill, who was blunt in talking about what happened in Kenosha after Milwaukee's Game 4 win Monday afternoon.

"It's just sickening," Hill said, when asked about Blake's shooting. "It's heartless. It's a f---ed-up situation. Like I said, you're supposed to look at the police to protect and serve. Now, it's looked at harass or shoot. To almost take a guy's life. Thank God he's still alive.

"But to almost take a man's life, especially in front of one's kids, that wasn't resisting, in his back at point-blank range, is a heartless and gutless situation. We need some justice for that."

When asked what the Bucks could do from inside the bubble, Hill didn't mince his words.

"We can't do anything," he said, flatly. "First of all, we shouldn't have even came to this damn place, to be honest. I think coming here just took all the focal points off what the issues are. But we're here, so it is what it is. We can't do anything from right here, but I think definitely, when it's all settled, some things have to be done.

The Bucks are intimately familiar with the issue of police brutality. In 2018, after Bucks guardSterling Brownwas cited for a parking violation, he was hit with a Taser by Milwaukee police. 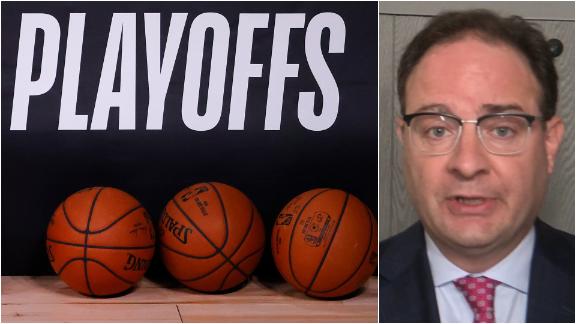 Woj addresses future of NBA playoffs after Bucks' boycott
Adrian Wojnarowski says NBA players will meet to discuss social injustice and where the future stands with the 2020 NBA playoffs. 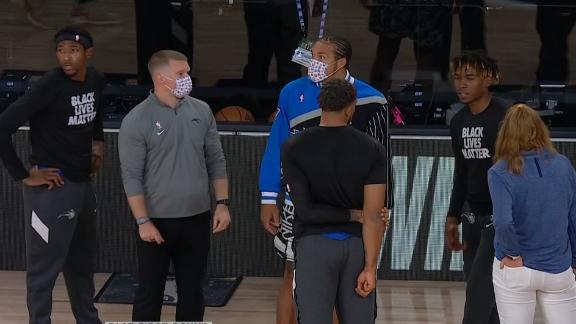