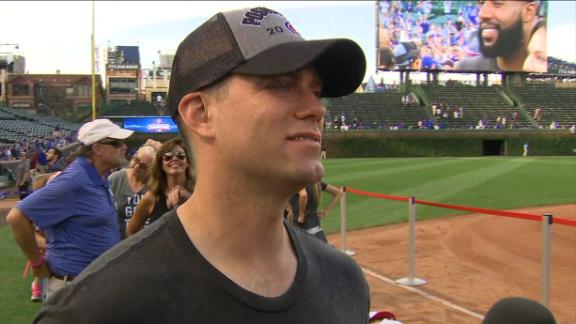 CHICAGO -- While the Cubs' players and coaches were waiting until after Friday's game to celebrate the clinching of the NL Central, the front office decided to get started on the tomfoolery a little early.

About halfway through the afternoon contest against the Milwaukee Brewers, photos of team president Theo Epstein and general manager Jed Hoyer sitting in the bleachers began to circulate on social media.

Several photos of Epstein drew widespread attention, including one posted by the website BornOnThird.

Epstein was wearing a fake bushy mustache, not unlike the one famously worn by former New York Mets manager Bobby Valentine during the 1999 season when he returned to the dugout after an ejection.

"We left after the bottom of the eighth and went down to the clubhouse. It was fun. It's great out there," Epstein said following the Cubs' 5-4 win.

"Normally we're in a suite and it's very standard type of deal, where we're watching the game and keeping an eye on things. To enjoy the real Wrigley Field and sit out there, feel the breeze, be among the fans, have a beer, it was wonderful. Even better than I thought it was going to be."

Questions abounded before the game about how the Cubs would pass the last two weeks of the season after clinching a postseason spot earlier than any time in franchise history.

The Cubs secured their first NL Central title since 2008 when the Cardinals lost to the Giants late Thursday night.

Wrigley Field was quiet when Cardinals slugger Matt Adams made the final out on the West Coast. However, it touched off a celebration in Chicago that included honking horns and chanting in the streets.

"We've got a lot ahead of us. We really do," Epstein said Thursday before the Cubs' loss to the Brewers. "It kind of all boils down to how you perform in October."

Epstein, of course, is no stranger to disguises.

After resigning as GM of the Red Sox, he exited Fenway Park in a gorilla suit. He also was reportedly spotted at a Pearl Jam concert donning a mustache.