The Jazz aren't going anywhere, but what's their ceiling? 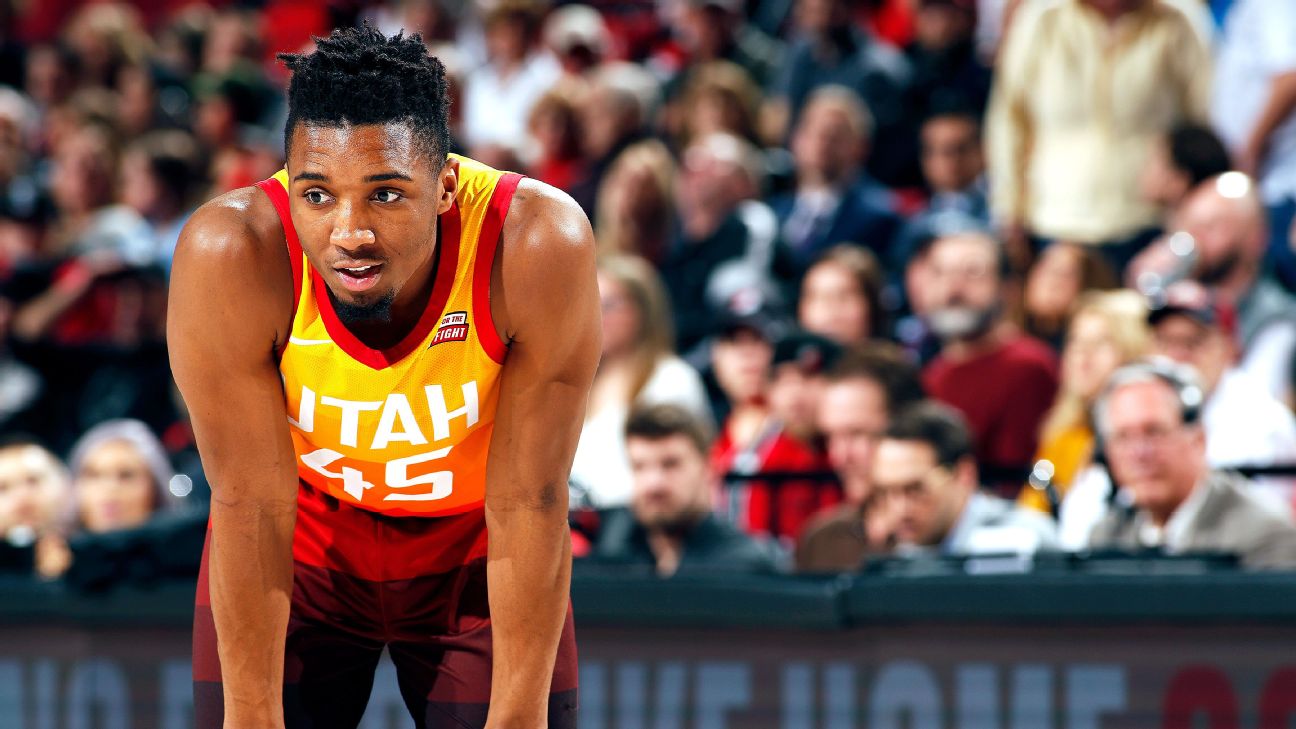 Forced to watch from the bench while recovering from a knee injury, Rudy Gobert had way too much free time and more than enough confidence when he pulled out his phone the night of Jan. 5, having just witnessed his Utah Jazz lose for the 12th time in 15 games.

"We will be fine," he tweetedafter the game.

Gobert's bold prediction wasn't immediately proved right. The Jazz bottomed out at 19-28 after an embarrassing loss to the Atlanta Hawks in Gobert's third game back. That left them sliding down the Western Conference standings with the likelihood of missing the postseason nearing a lock.

They looked like what they are: a young team in the middle of recovering from its franchise star's departure.

There was a caveat to the Jazz's struggles, though: Gobert had missed 26 games already and was working his way back into form. He said on the opening day of training camp that the Jazz were a playoff team, and he was intent on making good on that prediction.

Two nights after the loss to the Hawks, with Gobert gaining strength and rhythm, the Jazz beat the Detroit Pistons in overtime to kick off an 11-game win streak. Starting with that victory over the Pistons, the Jazz finished the regular season 29-6.

On April 8, after the Jazz clinched a playoff spot, Gobert retweeted himself.

"We went through a lot of ups and downs this year, this summer also, but I never doubted," Gobert told ESPN as he exited the Toyota Center after the top-seeded Houston Rockets ended the Jazz's season Tuesday night.

"I still don't doubt that we're going to get where we want to get. It's crazy that we're a team that people didn't think was going to make the playoffs, and we were competing for a Western Conference finals spot.

"There's no limit to what we can do."

In the wake of losing Gordon Hayward in free agency, the organization rallied around the 25-year-old Gobert. It started with a quickly deleted tweet from the team's official account seconds after Hayward announced he was leaving: a simple picture of Gobert. (It was replaced with a thank you to Hayward from the organization.) Gobert posted a not-so-subtle Instagram video of himself singing along to Chris Brown's "Loyal," but that was a total coincidence, he said in July.

Gobert isn't a star in the traditional sense. It's debatable where he falls in the hierarchy of top-level players, depending on your perspective on having the best paint protector in the league. Gobert isn't an offensive force on his own -- needing interior space and slick passes to set him up, making as much of an impact screening as scoring -- but he can alter a game with his presence alone.

In a five-game exit against the 65-win Rockets, though, Gobert was neutralized by James Harden's craftiness -- lobs and floaters -- and Chris Paul's midrange mastery. The series was a sad trombone for the Jazz layered over an otherwise magnificent season, a resounding, resilient rebound to Hayward's exit and a road map forward to a bright future for the organization, with draft steal Donovan Mitchell replacing Hayward as Utah's go-to guy and establishing himself as an ideal franchise cornerstone alongside Gobert.

"After last offseason, there was a little bit of uncertainty," Jazz general manager Dennis Lindsey said. "Rudy was the most certain of all of us members of the Jazz, and he's been proven to be right. And obviously, [Mitchell is] really good. I think in the coming years -- not just next year but the coming years -- you'll see a team that can compete at the highest level."

The question the Jazz are asking is the same one that everyone without LeBron James asks: How do you build a roster that is flexible enough to withstand the diversity of an 82-game schedule while also being specifically equipped to take on the Rockets and Warriors?

"We have two very serious challengers that are clearly in front of us in Golden State and Houston," Lindsey said. "That's part of the charge, trying to close that gap if we can. I think most of our solutions, what I've seen to date, are internal. We have several players at an age where, if they do the right things and we do the right things, they should improve."

It's the same thing the Oklahoma City Thunder went through two years ago after losing Kevin Durant. Hayward isn't in the transformational star category that Durant is, but he certainly was at the heart of the Jazz's core building strategy. It was a process to get to where the team was a season ago: 51 wins and a second-round playoff appearance. To lose Hayward was a hard reset, and it forced the Jazz back to the middle of the crowded West.

It's a challenging proposition to find a path back to 50 wins and the postseason without accessing high lottery picks via tanking. To go from the upper tier to the middle and then back to the upper isn't routinely done.

But the Jazz put themselves on that trajectory by virtue of an underrated franchise cornerstone in Gobert, a savvy coach and an exploding rookie star. The Jazz hit the turbo button on their remodel by absolutely nailing the pick (via a trade with Denver) of Mitchell and doing a magnificent job of developing him, putting more on his plate as he consistently mastered new challenges throughout his rookie campaign.

The series against the Thunder was the season's high point, as the Jazz took down a star-driven team behind collective, cohesive teamwork. The series featured all the best qualities of this Jazz team: dominant, game-changing defense from Gobert, the floor game of Ricky Rubio and the star turn of Mitchell.

But the series against the Rockets revealed holes and the work still left to be done.

"The things that fit us are things that have fit the Jazz historically all the way back to [John Stockton and Karl Malone's] days: smart, shooting, no-nonsense, physical mindset," Lindsey said. "All of those things are system and culture fits, if you will. Then there are things that we're going to have to evaluate again, a few things offensively.

"Do we want and/or need another scorer? Can some of the scoring come from within? Ricky as a scorer, Alec Burks' return to health, Dante Exum's development. So we'll just take a step back and evaluate it."

Spend time around the organization, and there's a clear spirit of fresh air. The arena is sparkling, with a gorgeous, revamped locker room, transformed concourses and fan attractions. The practice facility has been flipped, with new training and medical equipment, to go with an overhauled training and medical staff. The Jazz are investing in infrastructure and placing a priority on player development.

Much like the San Antonio Spurs, a small-market franchise that understands its limitations in free agency, the Jazz are making their organization one that is hard to leave once you're there.

They believe that with a young stable of talent, a top-level coach and all the bells and whistles being added everywhere else, they can be a draw. They see Gobert as the kind of player any star should want to join, an unselfish, team-first anchor who will clean up mistakes, set bone-jarring screens and put back misses.

They also see a systematic approach that they can pitch to players who exist in the margins: Come to Utah, improve your game, slot into a role, and excel. ForwardJoe Ingles is a prime example.

"We don't promise starting. We don't promise the ball," Lindsey said. "What we promise is a program that will make sense for them, that will keep them safe. We've proven that even at an advanced age, we can get them better. I think at the end of the day that's really what players and agents are looking for."

The thing is, the Jazz probably already have that second star. Mitchell has developed in almost every way the Jazz coaching staff asked him to, adding wrinkles to his game one film session at a time, such as wrong-footed finishes or floating drives. He has a competitive bravado to him, the kind that after a few playoff fires will only burn hotter.

"It's exciting with where we were last offseason, losing Gordon and everyone unsure with our team and what we were," Inglessaid. "Donovan started to prove who he is and what he can do and our team just grew throughout the year."

Though as Mitchell ascends and the offense gravitates more to him and accessing his elite skills (his usage rate climbed to 31.8 percent in the playoffs), can the Jazz maintain the structure and system that are in place, or will they have to evolve? Is Mitchell good enough to be his own offensive system in the way Harden is for the Rockets?

The Jazz have other offseason questions to answer, specifically with Derrick Favors and Exum. Lindsey made it clear that his preference is to retain both players, but the market can be cruel, and the Jazz are prepared.

"We have a defensive base to start from and several good players under contract, a few players who are free agents that we hope to retain," Lindsey said. "I think we're well-positioned for the next few years. We could have a little bit of flexibility going into this offseason, but more likely, the group deserves another shot to improve."

The Jazz re-emerged quickly in the dust of Hayward's departure, but they remain in a prickly spot in the complicated West. They are good -- clearly -- but they are teetering near the line of dangerous, rather than being an actual title threat.

That's what they have their eyes on: They're looking for the path ahead, to jump another rung on the ladder. Mitchell's pending stardom could be the key to unlocking it all, but the Jazz don't want to be beholden to his development as their only way forward.

A year after losing Hayward, though, the Jazz are more than fine. They're positioned for a promising future, and they didn't have to take any steps back to find it.

"This is just the beginning," Mitchell told ESPN after a postgame chat with his mentor Paul. "We've got a lot more in us. We'll be back here. We've got a lot of guys who are willing to work, so I'm excited. I'm really excited." 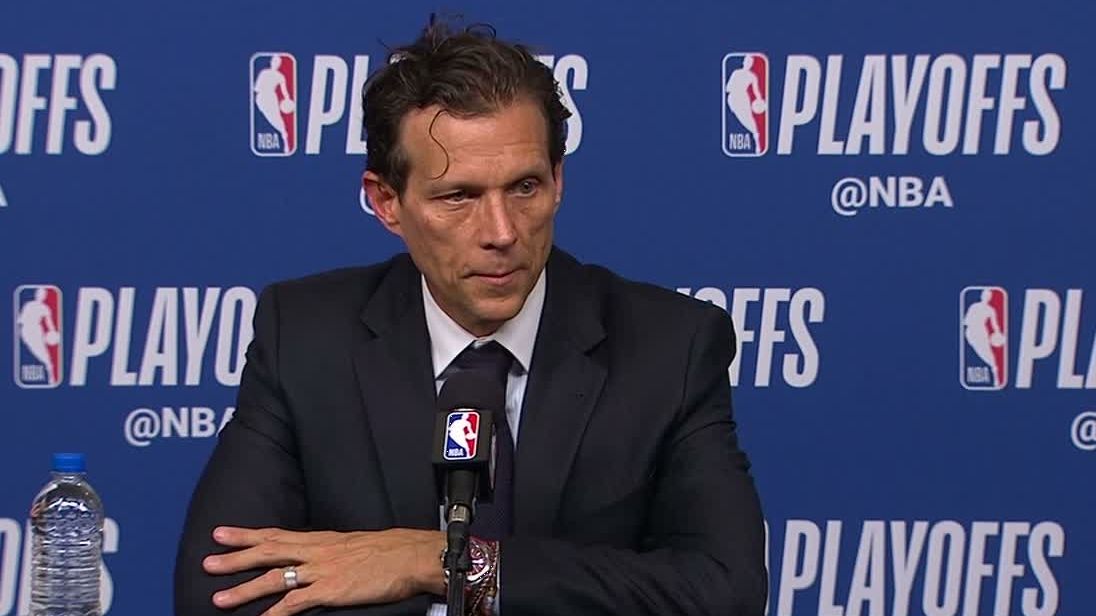 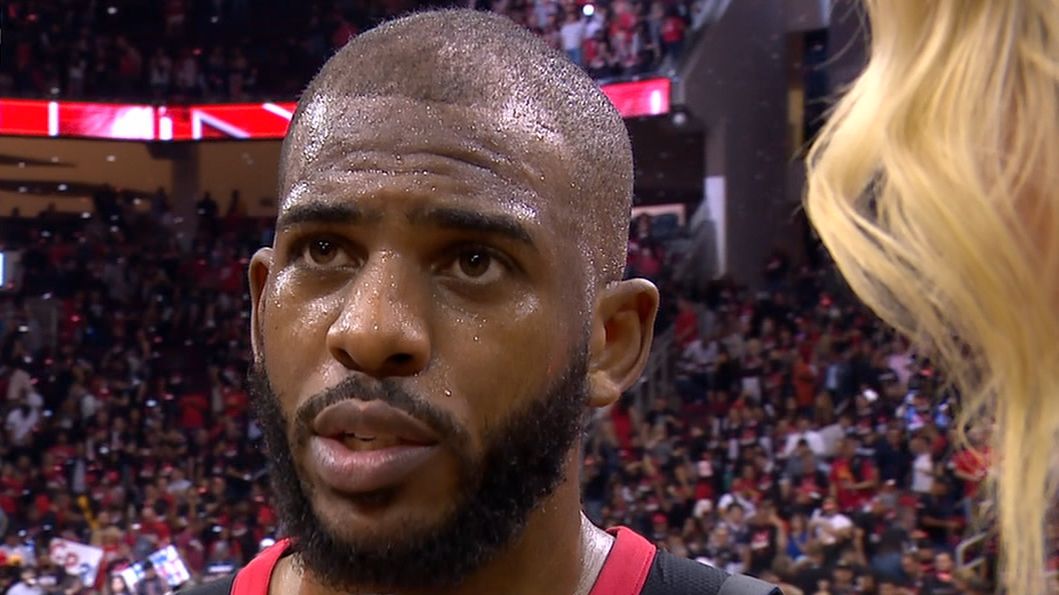