Texas to meet with Shaka Smart 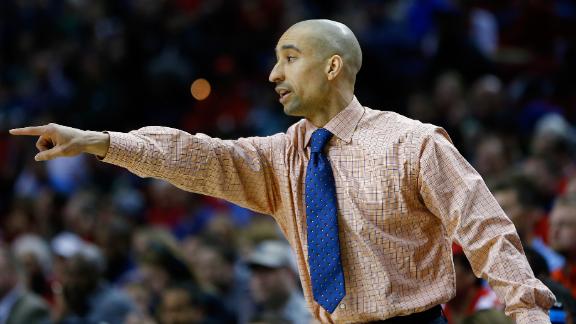 AUSTIN, Texas -- Texas athletic director Steve Patterson is scheduled to travel Thursday to meet with Virginia Commonwealth coach Shaka Smart and make an offer to coach the Longhorns, a person with knowledge of the trip told The Associated Press.

Texashopes to introduce Smart as its new coach as early as Friday, according to the person who requested anonymity because the talks with Smart are considered private.

Patterson has zeroed in on Smart since firing Rick Barnes last weekend after 17 seasons. Smart, 37, has been among the hot candidates for several high-profile jobs since leading VCU to the 2011 Final Four.

Smart's teams have won at least 26 games each of the past six seasons.

After hearing reports of Texas' interest in Smart, VCU athletic director Ed McLaughlin said, "Nothing is a done deal. He is still our coach."

Barnes' Texas teams won three Big 12 titles and made 16 NCAA tournament appearances. But Texas hasn't advanced past the first weekend of the tournament since 2008.

Details of Texas' contract offer were not immediately available.

Smart's compensation this year adds up to $1.8 million. If he leaves before May 1, he will owe VCU a $500,000 buyout, and his contract also contains a provision that if he becomes the head coach at another institution, that school would have to play VCU in a home-and-home series or pay VCU $250,000.

Barnes' salary this past season was $2.62 million.

Texas is pursuing a coach who has been reluctant to leave Richmond. Smart reportedly has shrugged off courtships from other major programs after leading to the Rams to unprecedented success.

"I enjoy it at VCU. It's a school where basketball matters quite a bit," Smart said before his team was bumped out in the first round of the NCAA tournament in an overtime loss to Ohio State.

"The support that we have [at VCU] is very, very good," Smart said.

But the time could be right for a move. If Smart packs up and heads to Texas, he'll land at a school that, while dominated by football, is set up for basketball success.

The Longhorns have the wealthiest athletic program in the country and sit in the middle of some of the most fertile basketball recruiting areas in Dallas and Houston, where top programs routinely recruit players. And Texas is looking to soon move out of its nearly 40-year-old basketball arena, although a new building would still be several years away.

But those assets drive up expectations. Texas fired Barnes despite winning or sharing several league titles and 16 NCAA tournament appearances. His best years came from 2003 to 2008, when Texas made the Final Four (2003) and twice more fell just a game short.

The Longhorns also had two national players of the year in T.J. Ford and Kevin Durant, just two of the future NBA stars Barnes recruited.

That success whetted fans' appetites, and they grew frustrated as the program stagnated in recent years. While Kansas has continued to dominate the Big 12, Texas hasn't won the conference championship or advanced past the opening weekend of the NCAA tournament since 2008 despite rosters packed with future NBA players.

The pressure to win won't just be on the coach, whether it be Smart or someone else. The hire is another big test for Patterson.

In barely 16 months on the job, Patterson has fired Barnes and forced football coach Mack Brown to resign; collectively, they had 31 years at the school. Patterson's choice to replace Brown, Charlie Strong, went 6-7 in his first season.

Smart would inherit most of a roster from a team that was ranked as high as No. 6 at one point but struggled to an 8-10 finish in the Big 12.

As of Wednesday, the Longhorns had lost 6-foot-11 forward Myles Turner to the NBA draft, but they should otherwise return four starters.