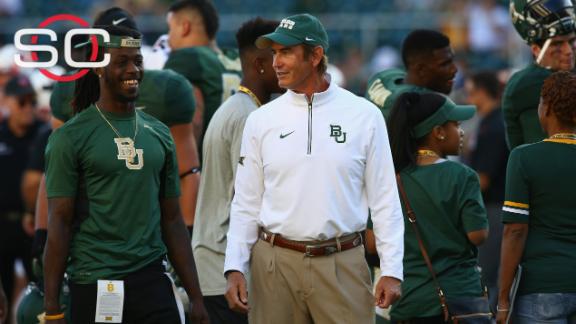 The over/under for the Texas Tech-Baylor game grew to as high as 90.5 points on Wednesday in Las Vegas, the highest college football total since at least 1990, according to ESPN Stats & Information.

"It's the highest total ever, to my knowledge, and I've been booking totals forever," said Art Manteris, a 40-year veteran Las Vegas bookmaker and current vice president of Station Casino's sportsbook.

Las Vegas sportsbook operator CG Technology opened the Texas Tech-Baylor over/under at 87 points on Monday. On Wednesday evening, it eclipsed 90 at Station's sportsbook, before ticking back down to 89 at the majority of books as of Thursday.

"The tempo just started a few years ago," Steele said. "If you would have thrown out a total of 75 in 2010, I would think people would have thought that to be outrageous."

According to BetLabsSports.com, there have been 13 games with totals of 80 or greater since 2008, almost all coming in the past four seasons. Baylor or Texas Tech has been involved in eight of those games.

Ed Salmons, head football oddsmaker at the Westgate SuperBook, said he wouldn't be surprised to see a total reach 100 in the near future. Even then, it might not be enough. This season, the No. 5 Bears are averaging 64.0 points per game, most in the nation. Texas Tech is No. 3 at 53.8.

With Texas Tech quarterback Pat Mahomes considered questionable with an ailing knee, this total could dip back under 88 before Saturday's 3:30 p.m. ET kickoff in Arlington. But it hasn't mattered who has played quarterback in recent Big 12 battles between the Bears and Red Raiders. The past five meetings have all gone over the total, averaging 95.8 points.

BetLabsSports is a product of Sports Insights, a partner of ESPN.