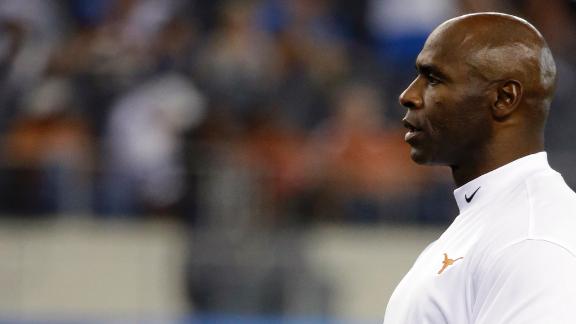 Strong said Tuesday something "popped up" in the last 24 hours that forced him to dismiss Estelle, one day after telling reporters the former starter would likely return to practice this week.

"Anytime a player is dismissed from this program, it hurts me," Strong said. "We're here to help young men. We're not here to run young men off. That is not our job. We're here to help them. It just bothers you, because when you've been given opportunities, you want to make sure you have every resource available for them to be successful."

Estelle started at left tackle in Texas' season-opening win against North Texas but was suspended for at least three games on Sept. 3 along with fellow starting tackle Desmond Harrison for an undisclosed rules violation.

The 6-foot-7, 290-pound junior started nine games and played in 16 during his career. He took over the right tackle spot last season when Josh Cochran was lost to injury. He was also suspended for the Alamo Bowl last season after being ruled academically ineligible.

Strong said Monday that Estelle, Harrison and receiver/running back Daje Johnson remained suspended for Texas' game at Kansas on Saturday. Johnson has already returned to practice, and Harrison could this week.

Both suspended players have done everything asked of them in recent weeks, Strong said, but "they are on a short leash at this point." Two weeks ago, Strong had hinted that Estelle and Harrison were down to their last strike.

The first-year head coach met with reporters after practice Tuesday to explain his rationale for dismissing another player. He defended his long-term goal of helping players build a foundation for their future and chuckled when asked if he's too hard on his team.

"I don't know why they would think that. I'm not hard at all," Strong said. "Those guys have more fun around me than they will ever have around any coach. That's the atmosphere I provide for them. I give them a lot of chances to get it right. I want to see them be successful."

Strong Kicks 9th Player Off Team
Danny Kanell discusses Charlie Strong's decision to release OT Kennedy Estrelle for violation of team rules and what this says about Strong as a coacb.