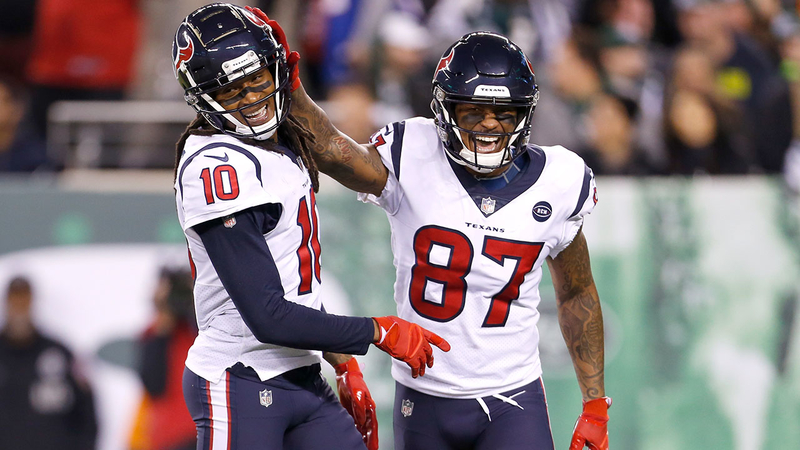 Deshaun Watson wasn't having it.

The cool-headed, playmaking quarterback threw a 14-yard touchdown pass to DeAndre Hopkins with 2:15 left, lifting the Texans to a 29-22 victory over Sam Darnold and the New York Jets on Saturday night.

"It doesn't surprise me that he's able to stay controlled in those situations," Hopkins said about Watson. "He's done that before in big games in his career. On the sideline, everyone was composed. Nobody panicked."

And no one was more in control than Watson.

"The game is never over for me," he said. "The plays are never over sometimes. I just go out there with the ball in my hands, put the load on my shoulders and lead the team to victory. I've been doing that my whole life and I have to continue to do that at this level.

"Every game comes down to a final drive. You've got to be able to block out all the noise, lock in and try to lead the team to victory."

After Darnold and the Jets took their first lead of the game on Elijah McGuire's 2-yard touchdown run, the Texans (10-4) answered right back.

A holding call on cornerback Morris Claiborne on third down prolonged the drive, and Watson completed passes to Demaryius Thomas and Hopkins to get to New York's 14. Watson then found Hopkins streaking down the left sideline and launched a pass that the receiver somehow came down with despite being tightly covered by Claiborne.

"I wouldn't want any other quarterback in this entire universe other than him," Hopkins said. "The things he can do, staying in the pocket after taking hits and deliver balls on the money - not a lot of quarterbacks can do that."

Hopkins rolled an ankle on the play, and Watson and Alfred Blue helped him to the sideline as the Texans celebrated. The receiver was OK, though, and finished with 10 catches for 170 yards and two TDs.

"To go out there against a good Texans team, it would've been awesome to be able to get that win," Darnold said, "but we just came up short."

The loss ruined what was a terrific night for Darnold, who made plays with his arm and legs all game. The No. 3 overall pick was 24 of 38 for 253 yards and touchdown passes to Robby Anderson and Andre Roberts. He set up an impressive 15-play, 73-yard go-ahead drive late during which he converted three third-down plays and a fourth-down opportunity.

On third-and-10 from the 19, Darnold took off for 14 yards - and a holding call on Aaron Colvin put the ball on the 2-yard-line. After Darnold was stopped for no gain on a quarterback draw, he handed the ball to McGuire who pushed up the middle - surrounded by a surging mass of blockers who helped shove him all the way into the end zone for the score.

It set off a wild celebration by the Jets. But Watson and the Texans still had their own comeback in store.