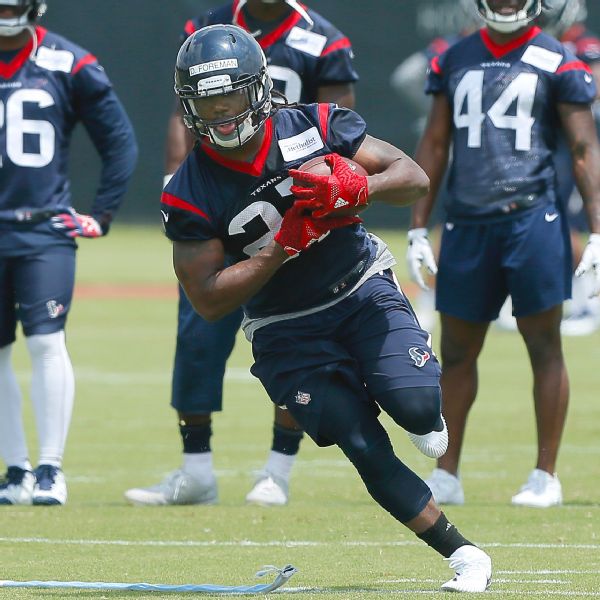 Houston Texans running back D'Onta Foreman was arrested in Austin, Texas, early Sunday morning and charged with marijuana possession and unlawful carrying of a weapon, both misdemeanors.

According to the University of Texas police department, officers initially responded to a report of marijuana smell coming from three cars parked outside a residence hall at 12:24 a.m. Sunday.

Foreman, whom police described as the owner of the firearm, was taken into custody and later released on bond. Six other men were cited for possession of marijuana and released.

Foreman's attorney, Chip B. Lewis, said in a statement that the running back was in Austin to visit friends, possessed the handgun legally and that he did not use the marijuana, which was not his, but belonged to a passenger in the vehicle.

"As he was leaving their residence, he was approached by police. Prior to a search of his vehicle, D'Onta alerted the officer that he had a handgun inside of his vehicle. This legal handgun was recently purchased by D'Onta and registered in his name. The handgun was properly secured inside of his vehicle as required by Texas law. A passenger in D'Onta's vehicle was in possession of marijuana. D'Onta did not use or possess the marijuana. Upon making his bond, he will submit to a urinalysis to confirm he has not used marijuana.

"D'Onta appreciates the professionalism of the officers involved in his arrest and in his booking at the Travis County Jail. We are confident this matter will be resolved justly once the State of Texas applies the applicable law to the facts," Lewis said in the statement.

Foreman won the Doak Walker Award as the nation's top running back after rushing for 2,028 yards at Texas last season.

He was a third-round pick of the Texans and expected to compete for a backup running back job.

The Texans issued a statement that said the organization is aware of the situation and gathering additional information.