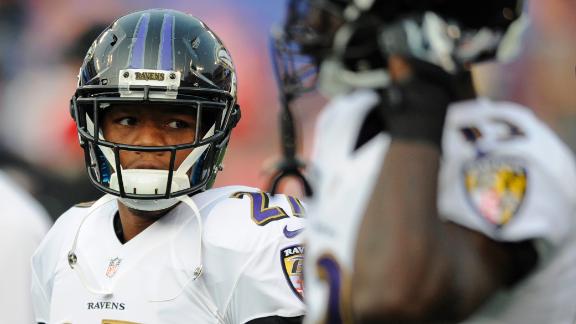 HOUSTON -- Despite having lost star running back Arian Foster for several weeks because of an injury, Texans owner Bob McNair indicated he would still be hesitant to sign free-agent running back Ray Rice.

"I think I'd want to talk with our players, and I don't know that that's something that they would like," McNair said Thursday. "We want people that fit in our locker room. As I said, it's all about teamwork. And look, we've got four good running backs. I don't know that he's as good as any of the four we've got. I don't see anybody else trying to sign him, so I think that's a pretty good indication of where he stands."

Rice has not played in the NFL since the 2013 season, when he rushed for 660 yards on 214 carries in 15 games. He missed the entire 2014 season once the Baltimore Ravens released him after video surfaced of him punching his then-fiancee and now wife, Janay Palmer, in an elevator.

McNair emphasizes character on his team -- the Texans have had only one arrest in the past five seasons. In the past, McNair has said there is some room for judgment calls, but he has a zero-tolerance policy for players who abuse women.

"We don't expect people to be perfect," McNair told ESPN.com in March. "But we don't want people that are going to be abusing other people and are undisciplined."

The Texans will be without Fosterfor at least the next six weeks after he suffered a groin injury on Aug. 3 that involved a muscle being pulled from the bone. He had surgery last Friday, and while sources said his prognosis is good, Foster still will miss regular-season games.

Behind him on the roster, the Texans have Alfred Blue, who backed up Foster in 2014;Jonathan Grimes, an undrafted pickup in 2012;Kenny Hilliard, a rookie seventh-round pick; and Chris Polk, who came to the Texans in free agency this offseason.

Rice's name also surfaced in Cleveland days after position coach Wilbert Montgomery called out the team's running backs, saying "nobody wants the role" as theBrowns' featured back. Head coach Mike Pettine told SI.com on Tuesday that the team has discussed whether it makes sense to sign Rice but was not at the point of reaching out to him.

Browns owner Jimmy Haslam, for his part, said he'd like to see Rice get another chance, but that the team was a long way from signing him.

"We have some young backs we like a lot, and we want to see what they can do first," Haslam told ESPN's Bob Holtzman before the Browns' preseason opener on Thursday.

"It'd be the coach's decision," he said.