Texans and Redskins come together after Alex Smith's broken leg 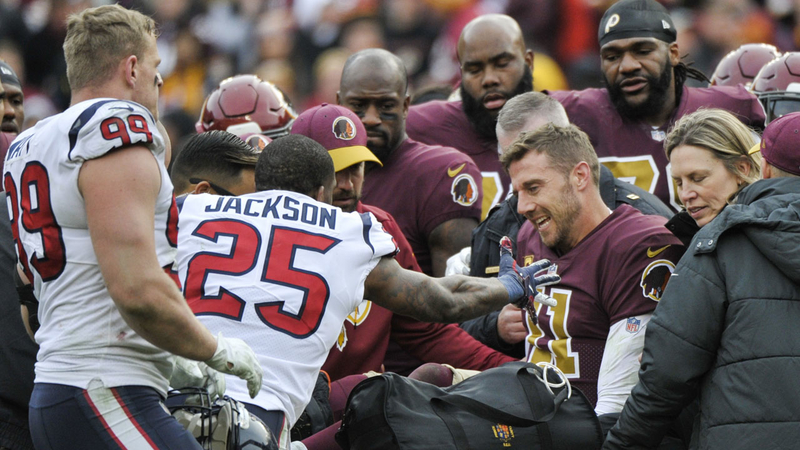 After Washington initially classified it as an ankle injury, head coach Jay Gruden confirmed after the game that Smith had broken his tibia and fibula and would need immediate surgery.

Smith was hurt when Houston's J.J. Watt and Kareem Jackson sacked him with 7:43 left in the third quarter.

Thoughts are with Alex. Absolutely gutted about it. Never want to see that for anyone ever. Wishing you all the best brother.

It was clear the injury was severe when it occurred, as players from both sides took knees as Smith was still on the ground. Every player from the Redskins went to the cart before it pulled away. Most of the players from the Texans' sideline came over to him as well. As Smith left the field he waved to the crowd and put his hands together as if in a prayer.

The Redskins only have one other quarterback on the roster in Colt McCoy, who threw a touchdown pass on the ensuing series after replacing Smith.

Former Redskins quarterback Joe Theismann, who was in attendance, tweeted that Smith's injury occurred 33 years to the day that he broke his leg in a Monday night game on Nov. 18, 1985, vs. the New York Giants. Theismann, who was 35 at the time, never played again.

The Redskins traded for Smith in the offseason, sending a third-round pick and corner Kendall Fuller to Kansas City.

Prayers for my guy man! You will bounce back!

McCoy, who has not started since Week 15 of the 2014 season, finished 6-of-12 passing for 54 yards and a touchdown as well as 35 rushing yards on five carries, but the Redskins' comeback attempt ended when Dustin Hopkins' 63-yard field goal attempt came up a few yards short.

Prayers going out to Alex Smith, his family & his teammates! Wishing you a full & quick recovery! God bless! 🙏 -- Ben. @Redskins