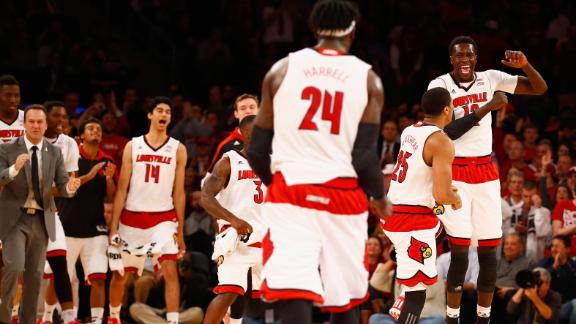 "It felt real good," Rozier said. "I've been getting in the gym 6:30 every morning with some of my coaches. I'm happy they can get up and be there with me and give me confidence to shoot the ball. That's one thing I was trying to focus on tonight, to have my confidence under my shot and it fell for me."

"I think Rozier is a very underrated passer and shooter," Crean said. "He is one of the premier guards in the country."

The Cardinals (8-0) also got outstanding performances from Montrezl Harrell, who had a double-double with 21 points and 11 rebounds and Chris Jones, who scored a career-high 24 points, and had nine rebounds and six assists.

"Our backcourt played a great game and Montrezl Harrell, who I think is the best player in the nation -- I've said that for quite some time -- because very few players can play with that type of motor," Pitino said.

"I'm not sure relentless is a strong enough word," Crean said. "I don't know what the next adjective is."

Harrell took advantage of mismatches on defense and didn't abandon what was working throughout the game.

"I just roamed the baseline and my teammates found me," Harrell said. "Every time I told them I don't want to come out to set the pick-and-roll because I'm not in a great position to offensive rebound. I feel like I had that advantage on them size-wise."

After the loss, Crean put Louisville among the elite in college basketball.

"I think you have to put them in that conversation," Crean said.

Louisville overpowered Indiana down low, outrebounding Indiana 52-34. The Cardinals' defense also put the clamps on the Hoosiers, forcing them into 19 turnovers. But Indiana wouldn't go away quietly.

Indiana opened the second half with an 11-2 run to take a 52-48 lead, matching their largest lead in the game.

Louisville's Jones then scored seven points in a 10-0 run to give the Cardinals a 58-52 lead, which they never relinquished.

Indiana: The Hoosiers made their third appearance in the Jimmy V Classic.

Louisville: The Cardinals made their second appearance in the Jimmy V Classic.

Pitino on Harrell: "He has a skill like Kenneth Faried and Dennis Rodman in his prime of just playing every possession as if he hasn't eaten in a week. It's quite special."

Pitino on Jimmy V Classic: "As a sidebar, I knew Jimmy Valvano so well and the Garden is quite special to me so we wanted to come in and obviously get a victory, but we wanted to have a great game for the fans and television because what they do for the V Foundation really deserves a great game."

Louisville Routs Indiana
Louisville crushed Indiana 94-74 and improved to 8-0 on the season.

Louisville Routs Indiana
Louisville crushed Indiana 94-74 and improved to 8-0 on the season.