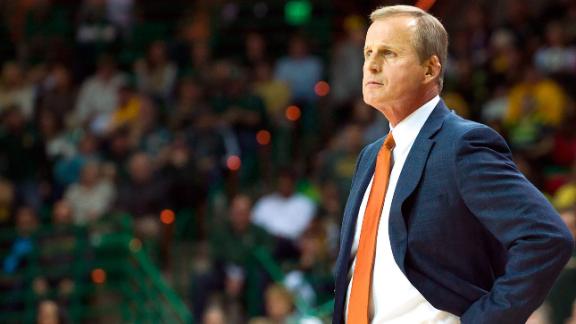 "Rick Barnes is an elite basketball coach in every respect," Tennessee athletic director Dave Hart said in a statement. "Rick brings an extremely impressive track record of excellence, as well as much-needed stability, to our men's basketball program. This is an exciting day for our Tennessee family."

Barneswas fired by Texas athletic director Steve Patterson over the weekend despite going to 16 NCAA tournaments in 17 seasons.

The 60-year-old Barnes won 402 games at Texas, the most in school history, and three Big 12 regular-season titles. This season, he became just the 13th active coach to reach 600 career wins. Texas made the Final Four in 2003 for the first time in more than 50 years.

The Longhorns did not live up to expectations this season, barely sneaking into the NCAA tournament before being eliminated by Butler in their opening game.

Barnes is 604-314 in 28 seasons overall, with stops at George Mason, Providence and Clemson.

He replaces Donnie Tyndall, who was fired after one seasonfor cause because of unethical conduct at his former post, Southern Mississippi. Tyndall went 16-16 in his lone season at Tennessee.

He takes over a Tennessee program that has gone at least as far as the NCAA regional semifinals four of the past nine seasons despite encountering plenty of recent coaching turnover.

Bruce Pearl was fired in 2011 amid an NCAA investigation after leading Tennessee to NCAA tournament appearances in each of his six seasons. Pearl was replaced by Cuonzo Martin, who left for California after earning one NCAA invitation and two spots in the NIT in his three seasons. Tyndall took over for Martin.

Hiring a veteran coach from a Big 12 school represents a change of pace for Tennessee, which selected head coaches from the mid-major ranks for its past four hires: Buzz Peterson (Tulsa), Pearl (Wisconsin-Milwaukee), Martin (Missouri State) and Tyndall (Southern Miss).

Tennessee becomes the second SEC school this month to hire a veteran coach with Final Four experience. Mississippi State announced last week that it was replacing the fired Rick Ray with 57-year-old Ben Howland, who made three consecutive Final Four appearances with UCLA from 2006 to 2008.