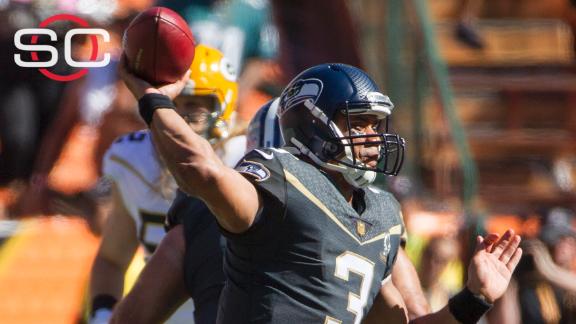 HONOLULU -- With no trip to the Super Bowl for the Seattle Seahawksthis season, their stars came to play -- and dominate -- at the Pro Bowl.

Russell Wilson threw three first-half touchdown passes to lead Team Irvin to a 49-27 victory over Team Rice on Sunday and earn offensive MVP honors at Aloha Stadium. Wilson's Seattle teammate Michael Bennett was the defensive MVP, after recording the game's only sack and deflecting a pass.

The Seahawks quarterback, who was the first player picked in the all-star game's draft, went 8-of-12 for 164 yards. He led scoring drives on three of Team Irvin's first four possessions.

Wilson threw touchdown passes of 14 and 2 yards to Atlanta FalconsteammatesJulio Jones and Devonta Freeman, respectively, in the opening quarter. Early in the second quarter, Wilson connected with Los Angeles Rams running back Todd Gurley for a 10-yard score.

A record 47 players declined to participate in this year's Pro Bowl, either due to injury or for personal reasons, or couldn't play because their teams are in the Super Bowl.Carolinahad 10 players selected, including quarterback Cam Newton, whileDenverhad four, including defensive starsVon Miller and DeMarcus Ware.

Wilson was the lone quarterback originally selected to participate in the game.

"Any time you have the opportunity to play the great game of football, you take advantage of the opportunity," Wilson said. "Playing in the Pro Bowl is a special thing because to be able to see all the amazing players across the league, who are the best players in the world, and to be able to play on one field together is a really, really cool thing."

Bennett was busy on defense but played one snap at quarterback late in the game and picked up 7 yards on a rush. The 6-foot-4, 274-pound defensive end said it was his first experience under center in his career.

"Only in my dreams," Bennett said with a laugh.

Two other Seahawks players mixed it up midway through the third quarter, when Team Irvin's Richard Sherman -- a cornerback -- was dropped for a 22-yard loss on a reverse by Team Rice linebacker Bobby Wagner.

"He said that he knew what he was going to do," Sherman said. "He knew I was getting the ball, and he knew he was making the tackle."

After Kelce's 4-yard reception from Manning gave Team Rice a 7-0 lead, Jones tip-toed along the left sideline after hauling in Wilson's pass near the back corner of the end zone for a 14-yard score.

Kelce caught the second of his two TDs on a 10-yard pass fromOakland'sDerek Carr to cut Team Rice's deficit to 21-14. The Chiefs star, who signed a five-year, $46 million contract extension on Friday, finished with a game-high five catches for 91 yards.

Team Irvin added a score late in the second quarter on a 2-yard touchdown pass from Bridgewater to Sproles to hold a 28-14 lead after two quarters.

The halftime festivities included a parade of local high school football players. Titans rookie quarterback Marcus Mariota, a Honolulu native, led his alma mater, Saint Louis School, onto the field during the procession and was greeted by loud cheers from the sellout crowd of 50,000.

It was the 35th time since 1980 that the NFL's annual all-star game was played at Aloha Stadium, and it was the third consecutive season that it has used an "unconferenced'' format.

Last year, the game was played in Glendale, Arizona. The site of next year's Pro Bowl has not yet been determined by the NFL. Returning to Hawaii is an option.

Martin helped Team Rice cut the deficit to 28-21 with a 3-yard run early in the third quarter. But Team Irvin put the game away with three straight TDs: a 50-yard catch by Robinson from Bridgewater, a 53-yard reception by Walker from Winston and a 7-yarder by Hopkins, also thrown by Winston.

Cincinnatitight end Tyler Eifert appeared to injure his foot while diving for a pass for Team Irvin.

It was the final game of Oakland safety Charles Woodson's 18-year career. He was escorted off the field by his two young sons, to rousing cheers from the fans who remained.

"I really got all the emotions out of the way a few weeks back, but this one is just the icing on the cake for me to be able to make the Pro Bowl, be able to bring my family over here and hang out in Hawaii," Woodson said. "It's been great."