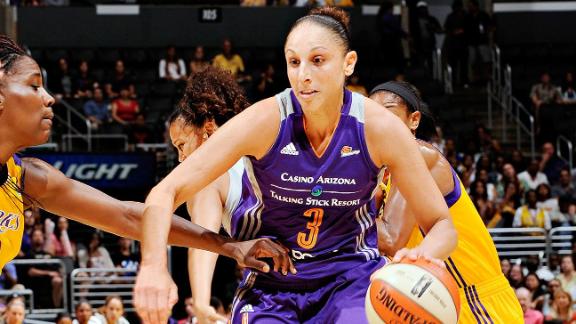 Diana Taurasi has decided to sit out the 2015 WNBA season, opting to rest for the summer at the request of her Russian club team.

The Phoenix Mercury star accepted an offer from UMMC Ekaterinburg, which will pay her more than her 2014 WNBA salary not to play, sources told espnW. Taurasi made just under the WNBA league maximum of $107,000 last year.

Taurasi's contract with UMMC pays her nearly $1.5 million this winter. The team wants her rested and healthy for next season.

"Since 2004, when I started professional basketball, it has been a cycle, a cycle that I have enjoyed so much," Taurasi told espnW. "With my team in Russia, a conversation began about making sure I'm at an elite level for a long time with them. I put everything on the table and weighed all my options and made the best decision.

"I'm really lucky to even have these options," she said. "It speaks volumes on how UMMC values our relationship and vice versa. For 10 years, I have never had any significant time off."

In a letter to Mercury fans, Taurasi wrote: "The year-round nature of women's basketball takes its toll and the financial opportunity with my team in Russia would have been irresponsible to turn down. They offered to pay me to rest and I've decided to take them up on it. I want to be able to take care of myself and my family when I am done playing."

The 33-year-old said she intends to return for the 2016 WNBA season, and also aims to play for Team USA in the 2016 Olympics.

The Mercury posted the news on the team's website, with a statement from general manager Jim Pitman.

"Regrettably, I must inform you that Mercury guard Diana Taurasi will not play the 2015 WNBA season," Pittman wrote. "Diana has a lucrative contract with the Russian team for which she has played during the last several WNBA offseasons. That contract includes an offer to pay her to rest this summer. With that, and the prospect of playing in the 2016 Olympics and future WNBA seasons, she has chosen to rest during the 2015 season.

"The duration of a professional athlete's playing career is finite; and, as such, Diana has elected to do what she feels is right for her, her family, and her post-basketball life. Though obviously disappointed, we respect her decision."

Taurasi has won three WNBA titles with the Mercury, including the 2014 championship. She was the No. 1 overall pick in the 2004 WNBA draft, and has spent all 11 seasons with Phoenix, where she is a seven-time All-Star.