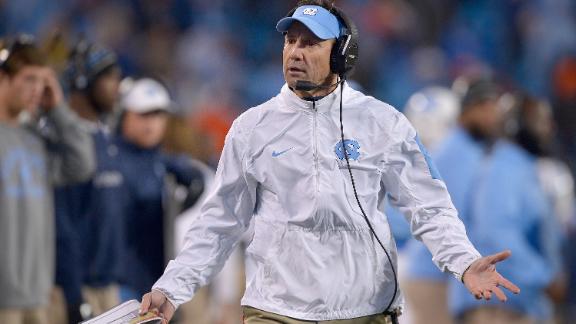 ESPN
Saturday's ACC championship game between No. 1Clemsonand No. 10North Carolinaended with a 45-37 win and continued unbeaten season for the Tigers and a disputed offside call that cost the Tar Heels a chance at a game-tying drive.

North Carolina's Ryan Switzer hauled in his second TD catch of the game with 1:13 left to cut Clemson's lead to eight and threaten the Tigers. The Tar Heels appeared to recover the ensuing onside kick but were called for being offside -- although replays didn't show any player in a blue jersey being offside -- and had to kick again. The Tar Heels attempted another onside kick, and this time Clemson recovered and ran out the clock.

The Tar Heels took issue with what they thought was a phantom call.

"That was a blown call, obviously," Switzer said after the game. "Anybody who's seen the picture or the replay knows it was blown, but one play doesn't lose you a game. Would have most definitely liked to have got that. With our offense, we can score anywhere on the field. One minute with three timeouts would have been plenty of time. Frustrating, definitely, but it was a blown call."

Tar Heels coach Larry Fedora said that with three timeouts and the ball near midfield with 1:08 left on the clock, he was confident North Carolina could have scored and had a chance at a 2-point conversion to send the game into overtime.

The ACC said the offside play was not reviewable. Through a league spokesperson, ACC coordinator of officials Dennis Hennigan said the referees were lined up properly on the play and that one official saw a North Carolina player break the plane before the ball was kicked.

"It sucks," Switzer said. "You never want to leave the game in the ref's hands, but we did everything we were supposed to do on that play. We executed correctly, we recovered the ball. I heard the referee say he could have picked three guys who were offsides, but when you look at the replay, guys are almost a foot behind the line when the ball is kicked, so it's head-scratching.

"Obviously, it makes you sick. It didn't lose us the game, but it also didn't help us win it, either."

"It isn't going to change,'' Fedora said. "It doesn't matter one way or the other, so I'm going to have to swallow it like a man and just take it.''

ESPN's Andrea Adelson and The Associated Press contributed to this report.

Robert Smith: 'Nobody's offsides'
Robert Smith joins Scott Van Pelt to break down the controversial ending to the ACC title game, in which UNC was called for offsides after appearing to recover its onside kick in the final minute.