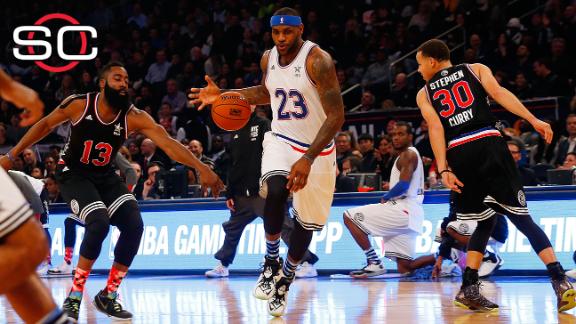 James was selected to the All-NBA first team for the eighth straight season and ninth time overall. He led Cleveland to the second-best record in the East at 53-29, although the Cavs went just 3-10 when James didn't play. The 11-time All-Star averaged 25.3 points and 7.4 assists per game.

"I've been able to play at a high level for a long time. I take my craft very seriously. I try to be the best I can be every single night when I'm out on the floor. To be rewarded again, it means a lot. I've done something pretty cool in my career so far, and hopefully I can continue," James said Thursday.

Along with Irving's selection to the third team, the Cavs were one of three teams with multiple players selected for All-NBA honors. The Clippers had three players honored: Paul, Griffin and Jordan. The Warriors had two: Curry and Thompson.

League MVP Curry and backcourtmate Thompson led Golden State to a franchise-record 67 wins in the regular season.Curry broke his own record for made 3-pointers, connecting on 286 from beyond the arc. He averaged 23.8 points, 7.7 assists and 2.04 steals per game, leading the league in free throw percentage (91.4) and ranking fourth in 3-point percentage (44.3).Curry is the first Warriors player to be named to the All-NBA first team since Latrell Sprewell in 1993-94.

It is the second consecutive All-NBA first-team selection for Harden, who finished second in the league in scoring and in the MVP voting during the regular season. He is the first Rocket with back-to-back All-NBA first-team selections since Hakeem Olajuwon (1992-93 and 1993-94). Harden averaged 27.4 points and seven assists in 2014-15. In a breakout season, Harden became the first player in league history to make 700 or more free throws and 200 or more three-point field goals in a single season.

Davis led the league in blocks with 2.94 per game and carried the Pelicans to their first playoff berth since 2011.Davis, who averaged a double-double with 24.4 points and 10.2 rebounds per game, is the first player to be named to the All-NBA first team within his first three seasons since Bulls guardDerrick Rosein 2010-11.

Marc Gasol set a career high in scoring average at 17.4 per game. He was named an All-Star for the second time in his career and earned his first All-Star Game start.He is the first Spanish-born player to be named to the All-NBA first team.

Duncan's selection was the 15th in his career, tyingKobe Bryantand Kareem Abdul-Jabbar for the most in NBA history. Duncan, 39, also becomes the oldest player to receive all-NBA honors since Abdul-Jabbar in the 1985-86 season, when the Hall of Famer was 38 years old.

Wall tweeted after the results were released:

Points for All-NBA honors are awarded on a 5-3-1 basis: 5 points for a first-team vote, 3 for second, 1 for third. Here's the full breakdown:

Information from ESPN.com's Calvin Watkins and ESPN Stats & Info was used in this report.