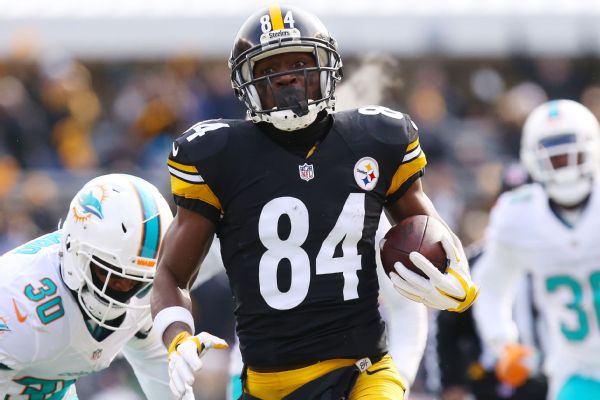 The 62-yarder was the Steelers' longest postseason passing score since Ben Roethlisberger's 65-yarder to Santonio Holmes in the 2008 AFC Championship Game against the Baltimore Ravens, according to ESPN Stats & Information. Brown beat the cornerback on a slant route, then shook the safety and found nothing but open field.

On the 50-yarder, Brown's first score on a screen pass, the receiver took a jab step inside, then cut down the sideline as tight end Jesse James issued a crucial block on Dolphins cornerback Tony Lippett.

Brown became the first player since Randy Moss in 2000 to post two receiving touchdowns of 50-plus yards in a single postseason game, according to ESPN Stats & Info. Moss went for 53- and 68-yard scores against the Saints in the NFC divisional playoff.

According to the Elias Sports Bureau, Brown's 119 receiving yards were the most by a player in the first quarter of a playoff game since Minnesota VikingsreceiverGene Washington's 120 yards in the 1969 NFL Championship Game against the Cleveland Browns.Brown's first-quarter total also more than tripled his 39-yard output against Miami in Week 6.

Brown finished the game with 124 yards on five receptions.

"It's not about stats," the 5-foot-10 Brown recently told ESPN. "It's about getting in that [trophy] hallway and doing something special."

Brown breaks loose twice for pair of monster TDs
Antonio Brown gets the Steelers off and running early with a touchdown from 50 yards out, and follows that up with a 62-yard score all in the first quarter.
Related topics:
sportsespnpostseasontouchdownsben roethlisbergermiami dolphinsnflfirst ever scorespittsburgh steelers
Copyright © 2021 ESPN Internet Ventures. All rights reserved.
TOP STORIES
Money in Lakewood Church wall may be tied to 2014 theft, HPD says
Fugitive task force searches for parents charged in MI school shooting
Fatal West Loop crash prompts traffic backup at 18th Street exit
Pasadena PD searching for suspect who stole Boy Scout trailer
Family of Navy vet shot to death on N. Fwy searching for answers
Watch 'ShopLocalish: Holiday Deals and Steals' with Tory Johnson
First, it was catalytic converters, but thieves moving to this part
Show More
Record highs possible Saturday, and Sunday will be steamy too
UH could turn national title picture upside-down if it beats Cincy
Mark Cuban buys entire Texas town, but what will he do with it?
How new TX law could impact topics educators can discuss in classroom
Omicron variant discovered in at least 7 US states
More TOP STORIES News