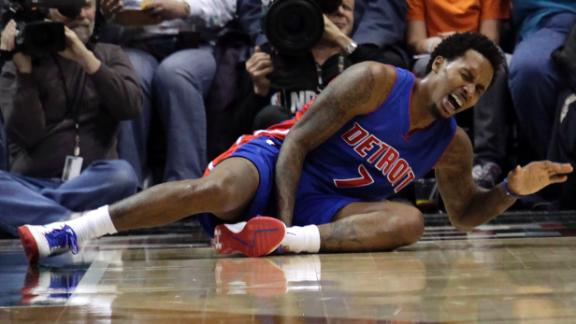 MILWAUKEE -- Detroit Pistons guard Brandon Jennings had to be helped to the locker room with an apparent lower left leg injury late in the third quarter of Saturday night's 101-86 loss to the Milwaukee Bucks.

The Pistons did not announce anything regarding Jennings' injury on Sunday, but the guard took to Twitter and seemed to allude to the amount of time he will be sidelined for.

Jennings fell to the floor after planting on his left leg while guarding an inbounds pass. He immediately clutched the leg above his sneakers while writhing on the floor in pain.

Play was stopped after the Bucks scored on the other end of the court with 1:03 left in the quarter. Jennings left with 16 points against the team that drafted him in the first round in 2009.

The Pistons said Jennings would undergo further evaluation after the guard needed help getting to the locker room. He will miss Sunday night's game against the Raptors.

Van Gundy said D.J. Augustin will have to play a bigger role with Jennings out for the foreseeable future.

"It is always a scary situation, especially when you are talking about a non-contact foul," teammate Greg Monroe said.

Jennings set a career high and NBA season high with 21 assists Wednesday in a 128-118 win over Orlando.