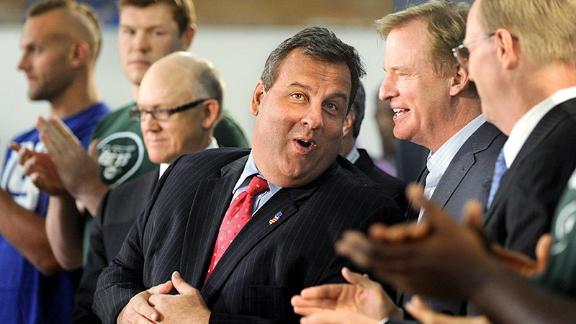 The NCAA, NFL and other major professional sports leagues filed a motion for a temporary restraining order Tuesday in an effort to halt legalized sports betting in New Jersey.

If the leagues are granted the temporary restraining order -- and multiple legal sources believe they will -- it would end Monmouth Park's hopes of opening its sportsbook Sunday.

The state must file its response to the leagues' restraining order request Wednesday. The leagues will file another reply Thursday, before U.S. District Judge Michael Shipp reviews the filings and decides if oral arguments are required.

Shipp will decide if the leagues have proven that they will be irreparably harmed by betting at Monmouth Park before granting the restraining order. In 2012, when the case was in its beginning stages, Shipp ruled that the leagues did face reputational harm from New Jersey's sports-betting efforts and had standing to pursue the case they eventually won. At the time, the leagues used a series of sealed and partially redacted reports they believe showed that fans' perception of the integrity of their games would decline if sports betting were to be allowed in New Jersey.

New Jersey questioned why the integrity of the games would be negatively impacted by the same type of regulated sports betting that is already taking place in Nevada, but it ultimately lost its request to have the leagues' suit dismissed.

This time, New Jersey has at least one new argument to dispute the leagues' claim of irreparable harm. NBA commissioner Adam Silver recently made public statements that indicated his league is open to participating in what he described as "inevitable" expanded legalized sports betting in the U.S.

There is also a 1976 ruling from a U.S. District Judge that denied the NFL's request for a restraining order to prevent Delaware from operating a sports lottery based on league games.

"I give Monmouth Park a zero percent chance to be taking bets Sunday," Daniel Wallach, a gaming and sports law attorney with Becker & Poliakoff, told ESPN.

Tassos Kaburakis, a professor at St. Louis University who filed an amicus brief when New Jersey petitioned to have the Supreme Court hear the case, agreed with Wallach.

"With the temporary restraining order that the leagues will most likely get, I'd say Monmouth Park has only a 10 percent chance of taking bets this week," Kaburakis said. "It's a pretty sure wager that [the leagues] will get the restraining order or injunction."

Another legal source who spoke on the condition of anonymity given his role in the case, however, pointed out an issue that New Jersey could address.

"Lawyers for New Jersey will likely contest whether the sports leagues, all of whom are headquartered outside of New Jersey, have standing to bring a new legal claim based on the New Jersey Constitution [Count II in the new complaint filed yesterday], in addition to the PASPA-specific counts previously litigated. It is an open issue."