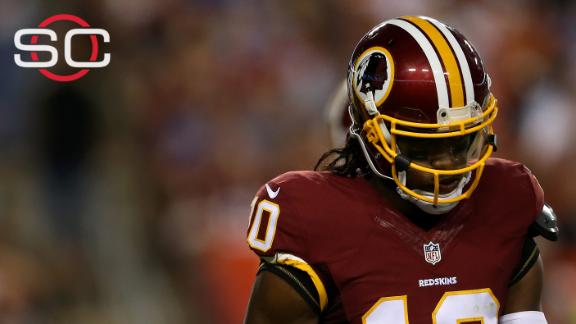 Griffin, who has been sidelined since Aug. 20 with a concussion, was scheduled to consult with an independent neurologist Friday. The Redskins still are awaiting word on the results of that exam.

All NFL teams were required to reduce their rosters to 53 players Saturday, and there had been widespread speculation that the Redskins could part ways with Griffin before the 4 p.m. deadline.

Gruden announced this past Monday that Cousins would be the starter this season but downplayed speculation over Griffin's future with the team, saying "his future is with the Washington Redskins."

Griffin will count $6.7 million on the salary cap, but it's a hit the Redskins can absorb; Washington entered the weekend with $12.5 million of space available. Should Griffin suffer an injury that extends into the 2016 season, his $16.1 million salary for next season is guaranteed.

The Redskins total cap hit at quarterback of $8.9 million is 36.27 percent below the league average, according to ESPN Stats & Information.

The question for the Redskins now becomes whether Griffin becomes a high-priced distraction as a backup. Gruden acknowledged that possibility earlier in the week.

"Moving forward, when you're the starting quarterback, it's your job to keep that job," Gruden said of Cousins. "You can't let that outside noise influence you as a player. If there's an incompletion or interception, I'm sure there could be some chatter about putting Robert in. We're not worried about that."