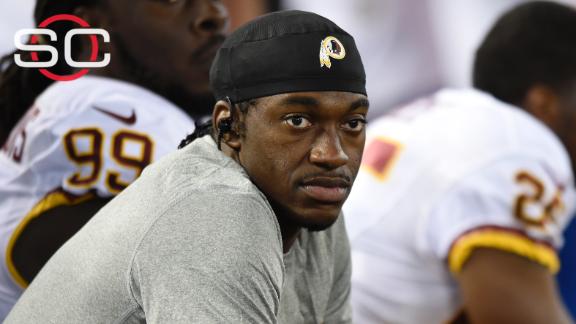 High-ranking Washington Redskins front-office officials and coaches want to part ways with quarterback Robert Griffin III, but are meeting resistance from team ownership, according to team and league sources.

The Redskins even have had trade conversations about Griffin with a handful of NFL teams, but have found no interest, and it remains unclear whether ownership would allow Washington to trade him, sources said.

It is becoming increasingly apparent that Griffin has lost his starting quarterback job, and depending on the events and conversations in the coming days, possibly his roster spot. Outside of ownership, there has been a groundswell of support from a strong segment of football people within the organization to change quarterbacks, but there is a question about whether they have the authority to part ways with Griffin, sources said.

Redskins general manager Scot McCloughan was hired this past offseason to rebuild the team, so he looms as a possible X factor in any big personnel decision that involves Griffin as teams trim their rosters from 90 to 53 players over the next week. McCloughan's ability to produce a resolution that all sides can live with now looms large.

If Washington plays Griffin this season -- and the NFL still has not cleared him to return to action from a recent concussion -- and he gets injured again, the Redskins cannot cut him until he's cleared to play again. In addition, should Griffin suffer an injury that extends into the 2016 season, his $16.1 million salary for next season is guaranteed. That could also scare off some teams interested in trading for Griffin.

Even if ownership prevails and convinces the Redskins' front office to keep Griffin, he is not expected to hold on to his starting quarterback job. The Redskins are determined to start a different quarterback on opening day against the Miami Dolphins, and Griffin's time as the starter now appears over. The more significant question is whether his time in Washington is as well.