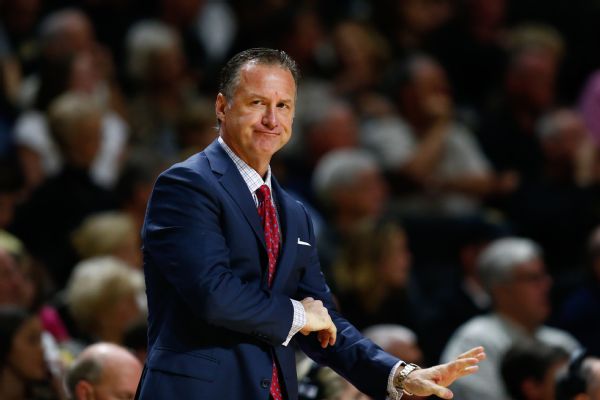 NC State coach Mark Gottfried's tenure in Raleigh is likely coming to an end following the season, unless the Wolfpack go on a run over the next few weeks and in the ACC tournament, sources told ESPN.

"He could be gone this week, if they get pounded by North Carolina [Wednesday] night," one source close to the situation told ESPN on Tuesday night.

The Wolfpack lost 97-73 at home to the 10th-ranked Tar Heels. Last Saturday, they suffered a 30-point loss at bubble team Wake Forest.

Gottfried was greeted by a smattering of boos during Wednesday's pregame introductions. Asked afterward if he felt he needed to make his case to athletic director Debbie Yow to keep his job, Gottfried declined.

Gottfried, 53, was hired by Yow in 2011 and proceeded to go to the NCAA tournament in each of his first four seasons, including a pair of Sweet 16 appearances. He still has three years -- worth an estimated $2.3 million -- on his deal.

However, the Wolfpack were 16-17 last season and are 14-12 and 3-10 in ACC play this season, with a likely high lottery pick on the roster in Dennis Smith Jr.

Yow, according to several sources, has been unhappy with the lack of effort with the current team.

"They have more than enough talent to get to the NCAA tourney," one ACC coach told ESPN. "They just don't play hard at all."

NC State spokesman Fred Demarest told ESPN that Gottfried remains the coach and that the focus of the team is on North Carolina. He also denied that the school has reached out to other candidates, as several reports have indicated.

If NC State does make a coaching move, it's likely that Dayton coach and NC State alum Archie Miller would be high atop the list, although sources told ESPN that Miller is unlikely to take the job.

Information from The Associated Press was included in this report.
Related topics:
sportsespnfred demarestmark gottfriedarchie millerdebbie yownc state wolfpackmens college basketball
Copyright © 2022 ESPN Internet Ventures. All rights reserved.
TOP STORIES
Daylight shows home destroyed after standoff with shooting suspect
What we know about man accused of shooting 3 HPD officers
Suspect arrested after 30-minute chase ends on I-45 in Texas City
Clouds clearing today, sunny through the weekend with rain next week
5 people charged in connection with Pct. 5 corporal's murder
How many times can I reuse my N95 mask?
Decades after TV anchor disappears, convicted rapist denies connection
Show More
Driver dies after slamming into 18-wheeler's trailer on US-59
Woman shot in the shoulder during robbery set up in SW Houston
Prepare for a major closure at I-69 and 610 West Loop this weekend
Officers escort body of corporal killed in ambush to funeral home
ABC13 obtains HPD scanner traffic of chase that led to shootout
More TOP STORIES News