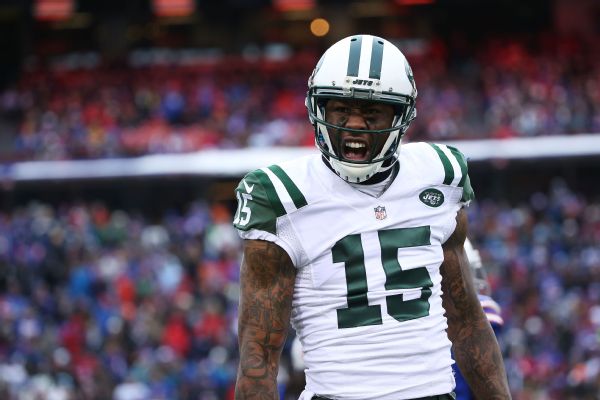 FLORHAM PARK, N.J. -- Outspoken wide receiver Brandon Marshall delivered a fiery halftime rant on Saturday that irked some teammates, according to team sources, and might have raised tensions in the New York Jets' locker room.

The Jets were losing to theNew England Patriots27-0, prompting Marshall's outburst. On Wednesday, he told ESPN.com his objective was to fire up the team. Not everyone took it that way.

While Marshall didn't engage in verbal altercations with any individuals, sources said, he sparked what was described as a raucous locker room.

"When we're getting blown out at halftime, there's no reason to be fighting amongst each other," Jets safety Calvin Pryor told ESPN.com. "I think that's why guys were upset because we needed to be fighting against the Patriots, instead of the Jets."

When reporters told Richardson that Marshall had described the 41-3 loss as "embarrassing," Richardson replied, "He should be embarrassed. ... No reason. He just should be. He knows what he did."

On Wednesday, Richardson declined to elaborate, except to say he didn't exchange words with Marshall at halftime or after the game.

Marshall and Richardson have a history. They had a heated postgame argument after a Week 3 loss inKansas City.

"Guys in the locker room know how Brandon can get," Pryor said. "We know what type of person he is. When he says something, you take it to heart. He always thinks he can be a guy to lend advice and help because he's been through a lot, which I get.

"But sometimes, how you feel can be saved for another time."

Richardson's postgame comments about Marshall shined a light on the Jets' locker room chemistry under coach Todd Bowles, who has come under fire with New York's 4-11 record.

Also after the game at New England, Jets defensive ends Leonard Williams and Muhammad Wilkerson suggested certain individuals didn't give maximum effort in the loss, creating the perception that Bowles has lost the locker room.

Bowles said he doesn't believe that to be the case. Despite the perceived turmoil, he's not likely to be fired. Jets owner Woody Johnson is thought to be leaning toward retaining Bowles.

Emotions were raw at halftime, with the Jets being routed on Christmas Eve.

"We were getting our butts kicked, and I was trying to get guys to respond, but not everyone responds to certain things the same way," Marshall said, confirming there was no altercation with Richardson. He said the only thing Richardson said to him was, "You're a captain."

Marshall said most of his rant was directed at the offense, but he was in the middle of the locker room. That, he said, drew the defense into it.

"When you compete at a high level and want to win, and things aren't going as well as you'd like, you're going to have some guys pissed off, frustrated," Pryor said. "Some things can be said and blown out of proportion.