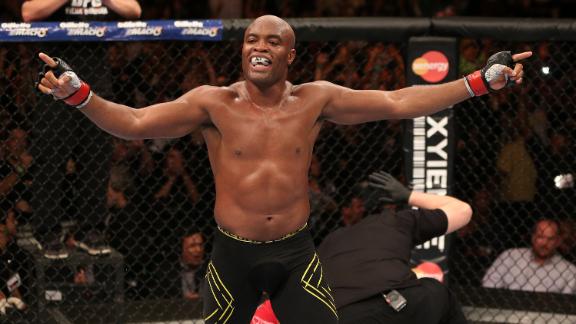 Former UFC middleweight champion Anderson Silva will return to action Jan. 31 in a 185-pound contest against Nick Diaz at UFC 183 in Las Vegas.

Silva (33-6) has not fought since he fractured the tibia and fibula bones in his left leg during a TKO loss to Chris Weidman at UFC 168 in December. The Brazilian recently received medical clearance, however, to accept the January fight. UFC president Dana White announced the matchup on "SportsCenter" on Tuesday. The bout will headline the UFC 183 pay-per-view event.

"The greatest of all time, Anderson Silva, is back," White said. "Also back is Nick Diaz. So we have made Anderson Silva-Nick Diaz on Jan. 31 in Las Vegas. It will be the main event, and it will be five rounds."

Diaz (26-9) has not fought since a unanimous decision loss to Georges St-Pierre in a UFC welterweight title fight in March 2013. He effectively announced his retirement after the bout and has sat out until now. At one point, he cited a contract dispute.

A native of Stockton, California, Diaz signed a three-fight contract extension with the UFC this past week in Las Vegas. He has fought almost exclusively at 170 pounds during his 13-year professional career. He fought Scott Smith at a 180-pound catchweight in 2009. Diaz has expressed interest in only big fights at this point in his career, particularly matchups that will move him closer to another UFC title fight. White referred to the Silva bout as that kind of fight for Diaz.

"Nick Diaz is a very popular fighter as it is," White said. "If he comes back and beats Anderson Silva, he could fight for the title. He's right there."

Silva, 39, suffered the injury when Weidman (12-0) checked a leg kick attempt in the second round of their UFC middleweight title fight. Silva fell to the ground in agony, and referee Herb Dean quickly moved in to stop the contest. The Brazilian underwent emergency surgery that night in Las Vegas. The operation involved a titanium rod being inserted into Silva's left leg. Dr. Steven Sanders, the operating surgeon, estimated a recovery time between six and nine months.

"We just literally made this fight five minutes ago," White said. "Anderson Silva feels great. He's facing a 13-month layoff -- a lot of fighters are off 13 months before they fight next. He is 100 percent healthy, kicking again and chomping at the bit to get back in the Octagon."

Silva was widely considered the greatest fighter in the world during his six-year title reign. He holds the all-time UFC record for consecutive title defenses at 10. He lost the belt to Weidman at UFC 162 in July 2013 in a second-round knockout loss. ESPN.com ranks Silva the No. 6 middleweight in the world. Diaz is the No. 9-ranked welterweight in the world.