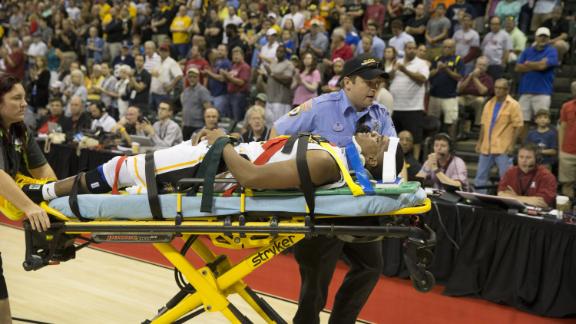 Wichita State forward Anton Grady was in "good spirits" at the hospital after falling face-first on the court during the Shockers' loss to Alabama at the Advocare Invitational on Friday in Orlando, Florida, the school announced.

In a statement later Friday, Wichita State said Grady was alert and responsive and had feeling in his extremities.

A CT scan on Grady came back negative, and he had an MRI later Friday.

In a text message to ESPN's Jeff Goodman, coach Gregg Marshall said Grady had suffered a spinal concussion. He added that all tests on Grady's spinal cord were negative and that he should be better "in a day or so."

The senior had started to run upcourt when his head collided with Alabama's Dazon Ingram with 3:07 remaining in the second half. Grady stayed on the court for several minutes before he was put on a stretcher and taken to the hospital.

"I was scared when he fell because to me it looked like a heart issue," Marshall told reporters after the game of Grady, who is averaging 10.5 points and 6.0 rebounds per game this season.

Marshall said Grady was conscious while being treated on the court.

"Seeing your brother on the court like that, it's more than a game at that point," teammate Ron Baker said. "It's life."

Both schools tweeted their concerns after the incident, and Alabama coach Avery Johnsonsaid after the game that "we're really praying for him."