Sheldon Richardson: 'Don't care' what Brandon Marshall has to say 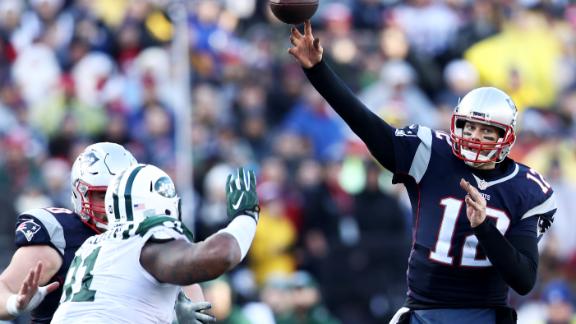 FOXBOROUGH, Mass. -- The New York Jets showed signs of fracturing on Saturday in the aftermath of their 41-3 loss to the New England Patriots at Gillette Stadium.

Such volatility suggests that coach Todd Bowles' job could be in danger. The Jets dropped to 4-11 on the season.

The Marshall-Richardson feud stems from earlier this season. It was sparked again Saturday, when Marshall said the 38-point loss was "embarrassing."

Minutes later, Richardson was asked by reporters if he felt the same way.

"He should be embarrassed," said Richardson, confirming he meant Marshall.

Richardson was asked why Marshall should feel embarrassed.

"No reason," Richardson said. "He just should be. He knows what he did."

The two players have a history. They engaged in a heated exchange in the locker room after the team's Week 3 loss to the Kansas City Chiefs; the incident was so intense that Bowles addressed it immediately with the entire team.

A few days ago, Marshall apparently angered Richardson by commenting on Richardson's vulgar Snapchat video, which drew the wrath of Bowles.

Echoing Bowles' comments on the video, Marshall called it "unacceptable."

"I don't care what that guy says," Richardson said, commenting on whether he was upset by Marshall's take on the matter.

Richardson and Marshall are two of the most outspoken players on the team. One player who didn't want to be identified described their relationship as "tense."

Richardson left little doubt about how he feels about Marshall. Asked if he respects the receiver, Richardson said, "Personally? Yeah. Professionally?"

He shrugged, as if to say no.

The Jets were blown out for the third time in the past four weeks, prompting questions about whether the team has quit on Bowles.

"Guys just weren't ready to play," Williams, one of the team's most promising stars, told ESPN.com. "We didn't really play with a lot of passion, a lot of enthusiasm. It seemed like we were out there going through the motions.

"Me, personally, I play hard every game. I know a lot of other guys on this team do, but some people are probably looking past the season, thinking that it's over and stuff like that."

Williams said he doesn't think Bowles should be blamed for that.

"He does a good job of reminding us and telling us what to do, but it's just like a parent," Williams said. "You can constantly tell your kid to stay out of trouble, but they're going to get in trouble sometimes. It's the same type of thing. But you can't fault him."

"The things we've been talking about all year, about miscommunications and guys not having energy and passion ... it's still going on," Wilkerson said.

Asked specifically about the energy level, Wilkerson said, "It could've been better. That's all I'm going to say about that."