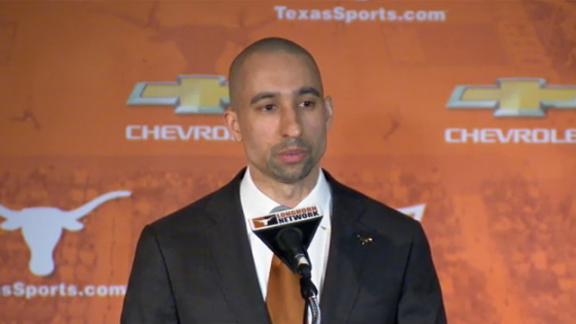 
Smart was introduced as the new basketball coach of Texas on Friday, leaving Virginia Commonwealth for the Longhorns after turning down several suitors, including UCLA, since taking VCU to the Final Four in 2011.


The 37-year-old said this job was different, a "no-brainer."


Smart, who won at least 26 games in each of his six seasons atVirginia Commonwealth, has been one of the hottest names in college coaching since leading the Rams to the Final Four in 2011. Texas athletic director Steve Patterson zeroed in onbringing Smart to Texas immediately after firing Rick Barnes over the weekend. Barnes later was hired at Tennessee.


Smart's contract is for seven years, the first six of which are guaranteed, for roughly $3 million a year, Patterson said.


"I take that really seriously," he said.


At VCU, Smart took over a program that had great success under Jeff Capel and then Anthony Grant. Smart hopes to avoid the pitfalls at Texas that his predecessors encountered when they left to take over programs at universities considered football schools.


Capel lasted five years at Oklahoma before being fired, and Grant spent six at Alabama before he was dismissed.

By leaving before May 1, Smart owes VCU a $500,000 buyout. His contract also contains a provision that if he became a head coach at another institution, that school would have to play VCU in a home-and-home series or pay VCU $250,000. Patterson said Texas "will honor the contract" but did not specify how.


Smart is bolting for a Texas program that hasn't been able to unseat Kansas atop the Big 12. But the Longhorns also boast the wealthiest athletic department in the country and easy access to some of the nation's most fertile recruiting grounds in Dallas and Houston.


Barnes led Texas to 16 NCAA tournaments in 17 seasons, but his teams hadn't made it out of the first weekend since 2008.


Barnes' best years came from 2003 to 2008, when Texas made its first Final Four in more than 50 years and twice more reached the Elite Eight. Texas also earned the program's first No. 1 ranking in the 2009-10 season.


But the program had plateaued, and the early-round exits in the tournament started to mount, despite rosters full of future NBA talent.


Kevin Durant, one of those NBA talents to come out of Texas during Barnes' tenure, welcomed Smart to the fold Friday.

Smart is sure to energize the Longhorns.


Under him, the Rams won the CBI postseason tournament in his first season. But he really became a hot coaching commodity when VCU made its monumental run in the NCAA tournament the following season. The Rams went from being a questionable selection, barely getting a bid and playing in the First Four in Dayton, Ohio, to beating five major-conference schools to reach the Final Four.


While Barnes' stumbles in the NCAA tournament over the years played a role in his dismissal, VCU and Smart continued to pick up tournament wins. In the past five seasons, VCU went 7-5 in the Big Dance while Texas was 2-4. As a lower seed, VCU went 5-3 as Texas was 0-3 since 2011.


Beyond the Final Four run, this season might have been Smart's best coaching job at VCU.


The Rams lost Briante Weber, the leader of their "havoc" defensive style, on Jan. 31 to a knee injury and played the last month and a half with scoring leader Treveon Graham bothered by a high left ankle sprain, sometimes even sidelined.


VCU (26-10) lost six of 10 late in the season, enduring its first three-game slide in Smart's six seasons, before winning five straight, including four in four days, to win the Atlantic 10 tournament.


Smart's jump to Texas has left VCU athletic director Ed McLaughlin with an unexpected coaching vacancy, one he doesn't expect to have any trouble filling.


McLaughlin said he has already heard from a number of candidates, though he didn't identify them.


"Thank God that we don't have any limits on text messages any more on our cellphones because I would owe $3 million for the last 24 hours," McLaughlin said Friday by telephone from Indianapolis, site of this year's Final Four. "The interest has been incredible, and quite honestly, it's humbling."


VCU is looking strongly at two coaches with ties to the Rams in Chattanooga's Will Wade and Rice's Mike Rhoades, multiple sources told ESPN's Andy Katz. Both were assistants under Smart before taking their current head-coaching positions.


McLaughlin said the next coach will have a lot to say about whether the havoc trademark carries on, but in what he hopes will be a "quick but thorough" search, the style of play will remain a priority.


"I think style of play is important for our student-athletes," he said. "They enjoy the style of play we have. I think it's important we take that into consideration with a new coach. Our fans, too, love how we play now. I think those two things right off the top. We also want someone who is a winner."


McLaughlin plans to handle the search himself, with input from university president Michael Rao when needed. The AD said he will use the gathering of coaches at the Final Four to get the ball rolling soon.


Smart led VCU to at least 26 wins in six consecutive seasons, a feat matched only by Duke. With the interest he has generated in basketball, a $25 million basketball practice facility is under construction and is scheduled to be ready for use in the fall.


ESPN Stats & Information and The Associated Press contributed to this report.