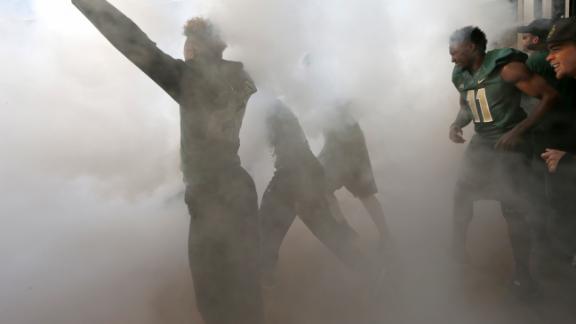 Seven members of Baylor's 17th-ranked 2016 recruiting class are requesting to be released from their national letters of intent.

Baylor's class that signed in February ranked as the best in school history, but Patrick Hudson, J.P. Urquidez, Jared Atkinson, Kameron Martin, Parrish Cobb and Donovan Duvernay have requested releases from the letters of intent that bind them to the university, sources close to the players confirmed. Hudson, Urquidez and Atkinson are ESPN 300 recruits.

Devin Duvernay, the No. 3 receiver in the ESPN 300 and the top prospect in Baylor's class, intends to request his release and is close to completing that process.

All seven signees were supposed to enroll at Baylor on Monday but held off. They want to play college football at another school after Baylor announced last week that coach Art Briles will be fired in response to a scathing review of the university's handling of sexual assault allegations made against several football players.

Interim coach Jim Grobe and three Baylor assistants visited Wednesday night with Cobb, a three-star cornerback from La Vega High School in Waco, Texas. Cobb's father, Collis Cobb, said he was told by Baylor coaches coming into the meeting that if his son wanted a release after talking with Grobe, the school would allow it.

However, Collis Cobb said after the visit it is his "impression that an appeal will have to be filed with the NLI." During the meeting, Collis Cobb said they reiterated to Grobe his son's desire to play football at another school.

In other developments Wednesday, ESPN 300 quarterback Kellen Mond, No. 48 in the 2017 rankings, tweeted that he is decommitting from Baylor. Mond was the last significant commit left in Baylor's Class of 2017.

Once a recruit signs an NLI, he is bound to that school unless he doesn't meet admissions or eligibility requirements, he doesn't attend any institution for at least one academic year, the school has been charged with breaking NCAA recruiting rules, or he is released by the university.

NLI director Susan Peal said signees are "bound by the provisions of the NLI" during coaching changes because they signed the document with the institution, not for a particular sport or coach, and it's not uncommon for coaches to leave their position.

Baylor has a 30-day deadline to respond to each recruit's request for a release. The school can grant a complete release or no release. It can also decide whether to lift the recruiting ban that prohibits contact between the recruit and coaches at other schools.

Some schools freely release recruits from their letters of intent when there is a coaching change made after signing day, but many schools also insist recruits honor the agreement.

If Baylor informs a recruit he will not be released, he can appeal that decision to the NLI Policy and Review Committee. A recruit submits in writing the reasons for requesting a release, and Baylor would submit its reasons for denying. The committee makes a determination based on that information.The time frame for that process is typically four to six weeks.

If the committee denies the request, each recruit can make one more appeal to the NLI Appeals Committee, but he would have to provide a reason for appealing with new supporting documentation of extenuating circumstances.

Martin, Baylor's four-star signee from Port Arthur (Texas) Memorial, said he has no interest in enrolling at Baylor and would have not picked the school had he known about the Pepper Hamilton investigation that led to Briles' termination.

Martin has been committed to playing for the Bears since July 2014. His mother, Marion Harris, said Baylor coaches never mentioned the investigation or the school's sexual assault issues to her during Martin's recruitment.

"I don't feel comfortable at all sending my son to be in that type of environment," she said. "I didn't raise him like that. Whether the allegations are true or not, there's too much going on there. I'm sending him to school for an education and not for all the extra problems there at Baylor.

"I don't think Baylor is the fit for him."

Martin said he stayed in touch with Baylor running backs coach Jeff Lebby but has yet to hear from Grobe. Martin said Grobe's hiring doesn't alleviate any of his concerns about enrolling at Baylor.

"I'll tell you like I'll tell him: I've heard a lot of good things about him, but it's not about the coach," Martin said. "I don't want to be around that environment."

Urquidez echoed much of what Martin said. He, too, said he would not have signed with the Bears had he known about the sexual assault allegations and thought he was walking into a "stable program and university."

Julian Urquidez said he has visited face-to-face with Baylor athletic department officials twice about his son's intent to play football at another school. He met with Chad Jackson, Baylor's senior associate athletic director for compliance, in Waco on Tuesday.

"Chad Jackson told my father today that they will not be releasing anyone or making decisions until we speak with Coach Grobe," J.P. Urquidez said Tuesday. "My father said he is here and would be happy to talk to Coach Grobe, but Mr. Jackson said Coach Grobe was busy and couldn't talk today."

Martin has discussed his views with several of the Baylor signees who have requested releases and didn't enroll Monday.

"In February, we were all talking about winning national championships," he said. "All of us, the guys who didn't show up, we're good guys and we want to do what's best for our family. It's just not a good environment. We just want Baylor to do the right thing by releasing all of us."

ESPN's Gerry Hamilton and Max Olson contributed to this report.