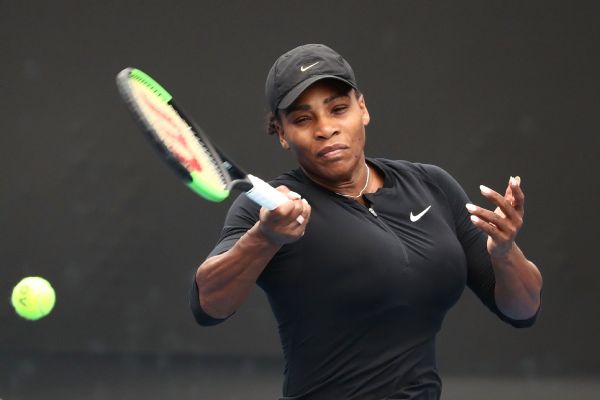 MELBOURNE, Australia -- Being perhaps the greatest women's tennis player ever does not immunize you against bad draws.

For the second straight round, No. 2-seeded Serena Williams drew a former top-10 player, onetime world No. 5Lucie Safarova. And for the second time, Williams emerged unscathed in a straight-sets victory.

The routine 6-3, 6-4 outing Thursday night at Rod Laver Arena sent the six-time Australian Open champion bounding into the third round.

"The last time we played was actually in the final of a Grand Slam," Williams said afterward, referring to the 2015 French Open final she won in three sets. "I'm really happy to have gotten through that.

"Definitely played two really tough opponents. It's a great way to start the tournament, but it's not going to get any easier."

According to the rankings, it is. Williams next faces 23-year-old Californian Nicole Gibbs, who earlier defeated fellow American Irina Falconi 6-4, 6-1. Williams defeated the No. 92-ranked Gibbs in their only previous meeting, with the 22-time Grand Slam champion surrendering only three games.

Williams said the early challenges in her draw could pay dividends through the tournament.

"At the end of the day, when I play players like [Belinda] Bencic and Safarova, they force me to play better. It forces my game from the very first day to be at a high level. So I think it's actually good," Williams said. "You know, I needed something to start really fast. I'm not going to complain about it."

Williams had one display of nerves Thursday: a double-fault on her second match point. She swiftly cashed in on the third.

Safarova, with almost 600 WTA matches on her résumé, has gained an extraordinary confidence with her vast experience. But in Tuesday's first round, she did something that surpassed the definition of clutch. In the crucible of one-and-done, she saved nine match points against Yanina Wickmayer and went on to win, an achievement matched only three times in the Open era.

One of those rare comebacks came at Wimbledon in 2014, when Nick Kyrgios did it in the second round against Richard Gasquet. Two rounds later, Kyrgios stunned then-No. 1 Rafael Nadal.

Safarova's best chance to impose herself Thursday came in the match's fifth game, when she created three break-point opportunities but failed to convert any. Safarova was 0-for-6 in the match, while Williams was 2-for-5.

Williams is now a heady 63-2 in the second round of majors.

In theory, the No. 1 ranking, currently held by Angelique Kerber, is still in play for Williams. If she reaches the final and Kerber loses her third-round match to Kristyna Pliskova on Friday, Williams will be back on top.

Johanna Konta, in a manner of speaking, is already there.

After her 6-4, 6-2 victory againstNaomi Osaka on Thursday, the ninth-seeded Konta leads the WTA's "Road to Singapore" standings.

Konta has now won 10 of 11 matches and was voted the WTA Tour's most improved player of 2016. She reached the semifinals in Shenzhen and took the title in her native Sydney, beating No. 3-ranked Agnieszka Radwanska in the final.

Radwanska, meanwhile, was upset by Croatian veteran Mirjana Lucic-Baroni 6-3, 6-2 on Thursday. By reaching the third round, Lucic-Baroni has her best result at the tournament in 19 years.

"It's amazing. Oh my God, it's been so long since I won a match or two. Well, this is the first time ever in Australia," Lucic-Baroni said. "As I'm getting older, it seems I'm getting better."

No. 28 Alize Cornet and No. 31 Yulia Putintseva were the only other seeded women to lose on Day 4.

"It's always good to be in the zone," said the fifth-seeded Pliskova. "It can always be a bit better."

Next up for Konta in Melbourne is a difficult matchup with No. 17 seed Caroline Wozniacki, who defeated Donna Vekic 6-1, 6-3.

Konta easily subdued Osaka, a 19-year-old from Japan in a match that lasted 69 minutes. In her on-court interview, Konta was asked whether anything had surprised her about being a top-10 player.

In reaching the semifinals last year, Konta became the first British woman to get that far in the Australian Open since Sue Barker in 1977 and at any Grand Slam since Jo Durie at the 1983 US Open.

Sometimes, Konta said, her breakthrough success from 2016 still sneaks up on her.

"Actually while we were doing the five-minute warm-up, and the presenter was going through how I did last year and how I'm back here now," she said. "That gave me goose bumps a little bit, just because it has kind of, yeah, come full circle with one season. That made me -- yeah, made me feel a bit warm inside."

Konta and Wozniacki have never played each other.