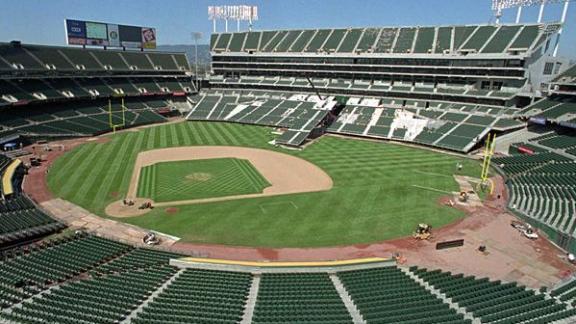 OAKLAND, Calif. -- Bud Selig will likely leave his tenure as baseball commissioner early next year with one unsettled situation that has him "frustrated."

The Oakland Athletics still don't have the new ballpark he says he believes they desperately need.

Selig praised all parties after the A's recently reached a 10-year lease agreement with the Oakland-Alameda County Coliseum Authority to stay at the rundown Coliseum. Whether the A's are able to one day build a new stadium at the current Coliseum site or elsewhere in Oakland, Selig will support the team's ideas.

"This is always something I wanted to get resolved before I leave office, which is another 5½ or six months," Selig said Tuesday, citing litigation as the current snag. "I've always said the local club, they know their market best."

Earlier this year, the City of San Jose appealed a judge's decision throwing out a key argument in its lawsuit against Major League Baseball over the A's plans to relocate to San Jose, where the San Francisco Giants hold territorial rights.

At the January 2012 owners' meetings, Selig said the Bay Area situation was on the "front burner." He appointed a committee in March 2009 to study the issues facing the teams, but never ruled on the matter.

"I know there's been criticism about the length this has taken. I'm proud of everything we've done the last 22 years, but this is one of those things as I look back on it, however, it's complicated, it's very complicated," Selig said. "Now we have litigation, so everything is now on hold. That's just a fact of life once we get in litigation. But let me say at the outset, this team needs a new ballpark. ... Once the litigation's resolved, then we'll all proceed."

Rob Manfred will succeed the 80-year-old Selig on Jan. 25. Selig is making stops at all of the ballparks during his farewell tour. He said Manfred is up to speed on the challenges for the low-budget A's, who have won the past two AL West titles.

"They've done a remarkable job under the circumstances," Selig said. "One of the reasons for the resurgence of this sport, there are multiple reasons, are the new stadiums. ... I wish it had been resolved. I understand people's frustrations, I do understand. There's a lot of history here."

Selig met with club officials during his short visit. Oakland's Bob Melvin was eager to get some time with Selig, who helped the manager get a job with Milwaukee after his playing days. Melvin had quite a connection: His late great-aunt, Estie, played bridge with Selig's parents.

"It's quite the industry at this point now. He's made a lot of changes in his tenure, whether starting with interleague, the competitive balance now and the strides that they took getting it to this point, instant replay," Melvin said. "There's a lot of things he's done that for an old-school guy has really had an eye on some of the new-school things. It's been an incredible run."