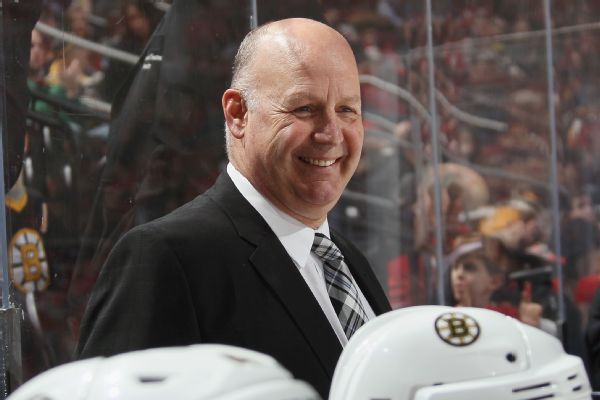 ESPN
TheMontreal Canadiens fired Michel Therrien on Tuesday and named Claude Julien, the recently fired coach of the Boston Bruins, as his replacement.

The Canadiens are in first place in the Atlantic Division of the Eastern Conference with 31-19-8 record, but they are 1-5-1 in February.

"I would like to sincerely thank Michel for his relentless work with the Montreal Canadiens over his eight seasons behind the bench, including the last five seasons when we worked together," Habs general managerMarc Bergevin said in a news release.

"The decision to remove Michel from his coaching duties was a difficult one because I have lots of respect for him. I came to the conclusion that our team needed a new energy, a new voice, a new direction.

"Claude Julien is an experienced and well respected coach with a good knowledge of the Montreal market. Claude has been very successful as an NHL coach and he won the Stanley Cup. Today we hired the best available coach, and one of the league's best. I am convinced that he has the capabilities to get our team back on the winning track."

The Canadiens are coming off a 4-0 loss to the Bruins on Sunday and don't play again until Saturday.

Julien was fired last Tuesday by the Bruins, with whom he won the Stanley Cup in 2011 and with whom he had been the longest-tenured coach in the league.

A source told ESPN's Pierre LeBrun that the Canadiens asked permission to speak to Julien on Sunday.Teams needed the OK to speak with Julien before hiring him because he was still under contract through next season with the Bruins. Montreal doesn't owe anything to Boston.

This is the second time the Canadiens have fired Therrien and replaced him with Julien. The same thing happened 46 games into the 2002-03 season.Julien ended up coaching there from 2003 to '06.

Therrien was in the fifth season of his second tour as Canadiens coach. They missed the playoffs last season after goaltender Carey Price injured his knee in November.

OwnerGeoff Molson tweeted thanks to his former coach.

The Bruins are six points behind the Canadiens in the Atlantic. The teams do not play again this regular season.

According to Elias Sports Bureau, the last team to make a coaching change 58-plus games into a season while in first place in the division was the 2007-08 Ottawa Senators. Bryan Murray replaced John Paddock after 64 games.

Julien, meanwhile, is no stranger to such a move. On April 2, 2007, the New Jersey Devils fired him with three games remaining in the regular season, even though they were in first place.

Will Bruins regret firing Julien now that he's in Montreal?
Michael Smith and Jemele Hill discuss on the SC6 whether the Bruins were too quick to fire Claude Julien and will regret their decision now that he's been hired in less than a week with their arch-rivals the Canadiens.
Related topics:
sportsespnbsnhlclaude julienmichel therrienboston bruinshabsmontreal canadiens
Copyright © 2020 ESPN Internet Ventures. All rights reserved.
More Videos
From CNN Newsource affiliates
TOP STORIES