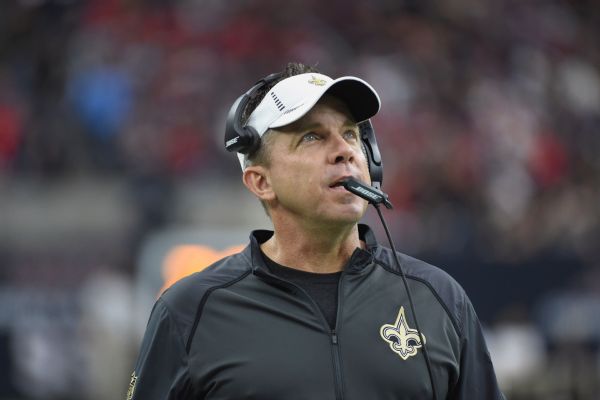 Sean Payton has come up with an innovative game plan to help defend against the spread of pregame social media in the locker room.

The New Orleans Saints coach told "Tiki and Tierney" on CBS Sports radio that he plans to add a "simple scrambler" to keep players off social media before kickoff.

"It's not a violation of your freedom," said Payton, who said he still wants players to be able to listen to music.

When asked if that will be a Saints rule or a league-wide thing, Payton cracked, "It's gonna be a Sean Payton thing."

The topic came up when Payton was asked about how he would have reacted to a player posting his postgame message live on Facebook, as Pittsburgh SteelersstarAntonio Brown did to coach Mike Tomlin earlier this month.

"It's a lot easier to handle if it's a third-string tight end. It's much more difficult to handle when it's one of your top players," Payton said. "But that being said, I'd have been pissed.

"Look, corporate America is dealing with this same issue. In the work world, employees at their desk, how much time are they spending on social media? Close to 35, 40 percent of the time?"

Payton, who is about to enter his 12th year as coach of the Saints, said he has had to learn to adapt his message and coaching style to players for multiple reasons.

One adaptation is that he tries to take a break every 40 minutes or so because players start to get antsy when they're off their phones for any longer.

Payton also said he has to constantly remind himself how much turnover has been on the roster -- even since the Saints won the Super Bowl just seven years ago.

"The biggest challenge is reshaping the message. How many have heard it?" Payton said. "You think that this team has heard what you might want to say. And it's really only [Drew] Brees and [Zach] Strief. Ninety-eight percent of the room really has no idea what you're getting ready to tell them.

"And then when you give them a [Bill] Parcells story, you have to preface and put a PowerPoint up (on) who Parcells is. ... They have no idea."
Related topics:
sportsespnnew orleans saintssimple scramblersean paytonlocker roomnflsocial media
Copyright © 2022 ESPN Internet Ventures. All rights reserved.
TOP STORIES
Body found at Memorial-area home tied to K-9 stabbing suspect
Drying out, but staying cool this week
Increased reward for tips to solve 2019 Tomball garage sale murder
Mom shares story of son's 'scary' battle with COVID complications
3-year-old injured in deadly chase with deputy on life support
Klein HS becomes first Space Force JROTC in Texas today
H-E-B's Scott McClelland retirement and what's next
Show More
Cause of death revealed for 23-year-old woman found dead after date
Sergeant was to walk daughter down aisle until his hit-and-run death
Omicron-specific COVID-19 vaccine starts clinical trials
COVID-19 vaccines do not affect fertility, study finds
51-year-old suspect in corporal's ambush killing on the run
More TOP STORIES News