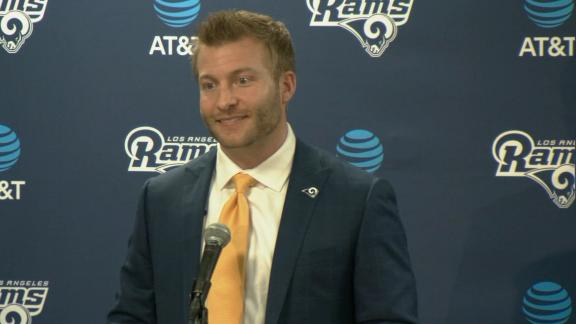 Rams owner Stan Kroenke was there. So was Marshall Faulk, the Hall of Fame running back who is one of the franchise's most successful players. And so was COO Kevin Demoff, the man leading the search for a new head coach.

Wolfgang Puck, the celebrity chef and owner, came by frequently, and every time he did, he kept saying the same thing:

We need to find a coach!

Puck had no idea that coach would soon be the 30-year-old young man sitting at that very table.

"You had to laugh," Demoff said. "As we're walking away, Sean goes, 'I don't think that guy knows that I'm interviewing to be head coach.' It'll be interesting to see if Wolfgang sees a TV and is like, 'Wait, that was the guy!'"

The wide-eyed, vibrant, youthful McVay was formally introduced as the Rams' new head coach on Friday afternoon, with his parents and brother joining roughly 50 media members in the audience. In 11 days, McVay will turn 31. And when the season begins, he will be the youngest head coach in the NFL's modern era.

He's been hearing that a lot, especially with regards to how he will lead a locker room full of millionaires who are about the same age or not much younger.

"The way you earn these players' respect is, 'Do you help them become a better football player?'" McVay said, talking about the importance of building trust with players as a way to maximize their abilities. "Those are the things that I think help with the youth, where you can make those connections, build those relationships."

McVay is fascinated by books on leadership, and his favorite is one written by Hall of Fame coach Bill Walsh: "The Score Takes Care of Itself: My Philosophy of Leadership."

McVay's grandfather, John, worked with Walsh as an executive on the San Francisco 49ers teams that claimed five Super Bowl titles in the 1980s and '90s. Sean's father, Tim, is vice president and general manager of WSB-TV in Atlanta.

Said Sean McVay: "My dad always jokes with me, 'You are a total vegetable other than with football.'"

McVay admittedly doesn't have many hobbies outside of this game. There hasn't been much time. After playing wide receiver at Miami University in Ohio from 2004-07, he joined the Tampa Bay Buccaneers as an offensive assistant for the 2008 season. Then he was an assistant coach in the United Football League, and then, in 2010, he joined the Washington Redskins, progressing from assistant tight ends coach to offensive coordinator to ballyhooed head-coaching candidate.

McVay thanked Bruce Allen, Mike Shanahan and Jay Gruden, among several others, from the podium.

He also mentioned Jon Gruden, the ESPN analyst who gave McVay his first chance in the NFL, as the man who "taught me the foundation of what I know about this game and truly taught me to look at the game from a 22-man perspective."

Gruden, head coach of the '08 Bucs team, is the name that NFL observers often think about when they first meet McVay.

"There are times when I close my eyes and hear Jon Gruden," Demoff said, "whether it's the cadence or the hand movements."

Kyle Shanahan, the Falcons offensive coordinator who was deemed a favorite when the process began, was supposed to be interviewed last weekend, but the Rams were held up in Boston due to inclement weather. They had rescheduled for this coming Sunday but never went through with it.

Said Demoff: "We knew we had our guy."

Wade agreed to a deal with the Rams on Thursday, a source told ESPN's Adam Schefter.

Really, though, McVay got the job because of how thoroughly he impressed the Rams during the interview process.

"When you're meeting someone who is 30 years old, your natural reaction is that you want to believe, but you're searching for the reasons why," Demoff said. "Sean kept knocking those down at every turn, to the point where 'why' changed to, 'Why not?'"

That moment hit Rams general manager Les Snead when he glanced at McVay's phone. He received more than 300 texts while his name made the rounds these last couple weeks. Snead saw phone calls from established Redskins players on both sides of the ball, like receiver DeSean Jackson and cornerback Josh Norman.

"At the end of the day, those men who go out on Sundays, they're the most important," Snead said. "He's been able to lead those guys to success, and when he left, they reached out."

"The terms you saw were 'brilliant,' 'genius,' 'star,'" Demoff said. "Jon Gruden suggested he was special. Those are amazing adjectives when you talk about describing someone. When you ask people for the negatives, they always say, 'He's young.' We always looked at that as just another descriptive word. To me, the age factor, when you look at what the players said, this is about leading players, and their devotion to Sean, the way they feel, what you read about him, is to us what negated the age factor. They could believe in Sean as a leader."

McVay first met with the Rams' interviewing party -- Demoff, Snead and senior assistant Tony Pastoors -- over dinner in Santa Monica on Jan. 4, which represented only the second time McVay had been to Southern California. They sat down for a formal interview the following morning, and after McVay left, Snead announced: "I'm buying stock in Sean McVay."

But Demoff wasn't certain until the night of that Tuesday dinner, while watching McVay and Faulk banter about football.

Shortly after the group sat down, actor Josh Duhamel and his wife, pop star Fergie, said hello to Kroenke. Then Puck came through. And then they all talked. On the way out, Faulk turned to Demoff and said, "That person can absolutely be your next head coach." The next day, Faulk raved about McVay in a phone conversation with Kroenke. And then, on Thursday morning, Kroenke offered McVay a five-year contract over breakfast.

That dinner did it.