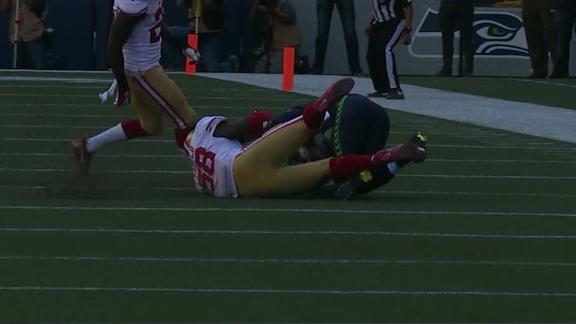 Wilson scrambled and tried to stiff-arm 49ers linebacker Eli Harold, but Harold brought him down, and it appeared that Wilson's left leg bent awkwardly as he went to the ground.

Wilson missed one snap before coming back in to finish the possession. Doctors ran him through a number of tests on the sideline. On the next offensive possession, with the Seahawks up 27-3, backup quarterback Trevone Boykin replaced Wilson.

Wilson was fitted for a knee brace by team doctors on the sideline. He then stood with his helmet in hand next to Seahawks coach Pete Carroll and appeared ready to return, but the Seahawks eventually took his helmet away, indicating he's done for the day. It's unclear if Wilson was removed from the game because of the score -- Seattle led comfortably -- or because of the severity of the injury.

In Week 1, Wilson suffered an injury to his right ankle but didn't miss any playing time.

This is the first time in Wilson's career he has missed snaps because of an injury.