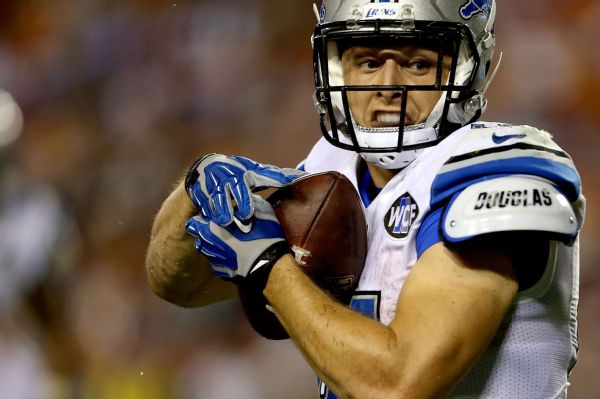 ALLEN PARK, Mich. -- Zach Zenneremerged as the Detroit Lions' top running back in the latter part of this season. On Tuesday, he received some praise from Seattle Seahawks defensive lineman Michael Bennett.

"There's not many white running backs in the NFL, but he has to be the best right now," Bennett said. "He's doing such a great job of cutbacks and hitting the hole. He's a really good back. I know all the stuff he did in college, three straight seasons of 2,000 yards. I don't care where you at, if you can do that, you have got amazing talent.

"I think he's just an amazing running back, the things he can do with the ball. Good balance, he can spin, he can catch it out of the backfield. I think he fits the offense perfectly."

Zenner and the Lions will visit Seattle to face the Seahawks in a playoff game on Saturday night.

Zenner, an undrafted free agent out of South Dakota State in 2015, began this season as a healthy scratch behind Ameer Abdullah, Theo Riddick and Dwayne Washington. Abdullah was hurt in Week 2 and Zenner became active on game days.

Zenner, 25, has become Detroit's primary back the past two weeks. He has 88 carries this season for 334 yards and four touchdowns, along with 18 catches for 196 yards. The 3.8 yards per carry are the most of any Lions player on the active roster for Saturday's game.

Bennett said he was surprised at what Zenner has done because there aren't many white running backs in the league. Other than Zenner, San Diego's Danny Woodheadand Cincinnati's Rex Burkheadare the most prominent. There are multiple white fullbacks in the NFL, including Zenner's teammateMichael Burton, the New Orleans Saints' John Kuhn and the Green Bay Packers' Aaron Ripkowski.

"That surprises me a lot because you don't see a lot of running backs in the NFL. There's a couple of them, but right now he's really, really good," Bennett said. "He does a lot of great things. Even in the pass protection game he steps up and he does a great job of protection.

"I'm not surprised he's the starter right now because of all the great things that he's doing."

Bennett also had some things to say about his former Seahawks teammate, Lions wide receiver Golden Tate. He complimented Tate's abilities and said he was glad when he would bring Top Pot Doughnuts from the Seattle chain to the facility for the defensive linemen.

But in a way that only Bennett could, he seemed surprised at one thing about Tate, who has two 1,000-yard seasons in his three years in Detroit.

"He got the weirdest-looking body but he can always make plays," Bennett said. "I always think he looks like a bird. I can never understand how that body does what it does."
Related topics:
sportsespnmichael bennettdetroit lionszach zennernfldanny woodheadbest white running backdwayne washingtonseattle seahawksameer abdullahtheo riddicksan diego chargers
Copyright © 2022 ESPN Internet Ventures. All rights reserved.
TOP STORIES
Wanted suspect identified in constable corporal's ambush murder
Sergeant was to walk daughter down aisle until his hit-and-run death
Grab the umbrella! Widespread showers move in Monday
'We knew something big exploded': ABC13 recalls moment of Watson blast
2 adults killed and 12-year-old hurt in crash with speeding tow truck
Dad charged and fired from job after racist tirade posted on TikTok
Bad Bunny announces stadium tour stop at Minute Maid Park
Show More
5 tax changes that can boost your refund this year
Getting paid on Venmo or Cash App? New tax rule might apply to you
Tax filing season starts Monday. What to expect for 2022
Texas agriculture commissioner suing to stop aid for Black farmers
Kohl's, target of activist investors, gets a buyout offer
More TOP STORIES News