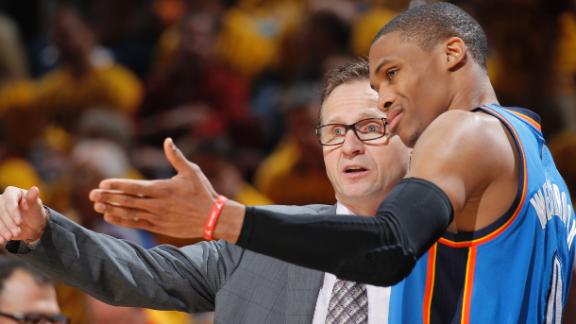 OKLAHOMA CITY -- With the season unexpectedly ending without a trip to the postseason, questions about the future of Oklahoma City Thunder coach Scott Brooks have sprung up once again.


"I expect to be the coach next season," Brooks told reporters at the team's annual exit interviews Thursday.


The Thunder missed the playoffs for the first time in five seasons, finishing 45-37 and losing out to the New Orleans Pelicans by virtue of a tiebreaker for the final spot in the Western Conference.

Brooks, who is under contract for the 2015-16 season and has a team option for the 2016-17 season, has a .620 winning percentage and has guided the Thunder to five playoff appearances -- including three of the past four Western Conference finals and the NBA Finals in 2012.


"We haven't won a championship, but we've done a lot of things that have put us in that position," Brooks said. "We've had some unfortunate bad fortune going back to three years ago, so you never really know what this team can really be until it can stay healthy throughout the season and, most importantly, this part of the season."


This season was marred by injuries, with reigning MVP Kevin Durantplaying in only 27 games. Russell Westbrook also missed 15 games, and Serge Ibaka didn't play in the final 18.


"He led us, man," Durant said of Brooks. "He made sure everybody was emotionally stable because we had a lot of guys in and out of the lineup and he kept everybody together. That's what your head coach is supposed to do. I can't really say nothing about it because he did his job. He kept us together."


Said Westbrook: "He did a great job. I don't think he gets enough credit for some of the stuff he does behind the scenes. Obviously a lot of people not in this building maybe want him to do other things and want to see other things from him, but as a coach and as a friend, I think he does an amazing job communicating what he wants out of the players.


"Obviously he can't make players do things that they don't want to do. With the group of guys we had on our team and the guys that wanted to be here, I thought he did a great job of keeping the boat afloat, helping us find a way to have a chance to make the playoffs."


A Yahoo! Sports report said Brooks' job status is to be evaluated by the team, suggesting that some close to the Thunder coach have doubts about his security.