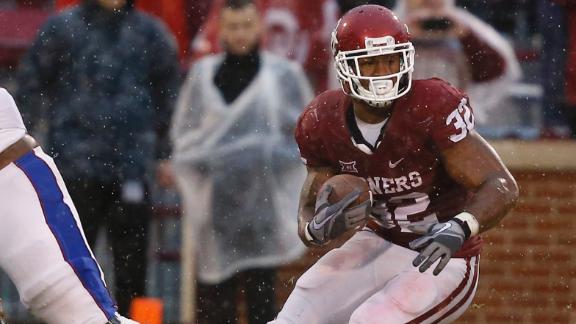 "You can put one of the other guys in," the true freshman said to his position coach. "The record is not important."

The Oklahoma offensive line overheard the conversation. And wanting the record more than the eventual record-breaker, it overruled him. Perine re-entered the backfield, and on the Sooners' second play of the fourth quarter Saturday against Kansas, he reeled off a 42-yard run to break the record with 427 rushing yards. He then was subbed out to chants of "Pee-rhine, Pee-rhine" from a rain-soaked Owen Field crowd.

"It really can't -- it's still surreal," Perine said when asked afterward how he felt. "I'm not really feeling special in any type of way. I was just looking to do what I had to do to help this team win."

Perine did just that in Oklahoma's 44-7 stomping of the Jayhawks. And then some.

Just last week against Nebraska, Gordon broke the FBS single-game mark previously held since 1999 by TCU's LaDainian Tomlinson, who with 406 yards against UTEP had been the only FBS back ever to run for 400-plus yards in a game.

"That's disappointing," Gordon told reporters after the Badgers' 26-24 victory against Iowa on Saturday. "But congratulations to that guy. That's really not easy to do. Hats off to him. I'm sure one day someone else will get that."

Even though Keith Ford started at running back for the Sooners on Saturday, Perine rushed for 222 yards in the first half to put himself within striking distance of Gordon's record. Then he opened the third quarter with a 66-yard touchdown run on Oklahoma's first snap.

In all, Perine had eight rushes of 20 or more yards Saturday, more than 19 FBS teams had all season entering this week, according to ESPN Stats & Information.

"Perine was just sensational," said Sooners coach Bob Stoops, who gave the game ball in the locker room to Perine, who then did a little dance to satisfy his boisterous teammates. "Samaje is such a humble guy in everything he does. It was fun to get [the record] with a guy like that. The whole team took pride in it."

The 5-foot-11, 243-pound Perine arrived at Oklahoma with humble expectations. He wasn't even the most highly touted running back in the Sooners' February signing class.

Joe Mixon, who was suspended for the year after an altercation before the season, was viewed as the gem of the recruiting class. Perine, who hailed from the Austin, Texas, suburb of Pflugerville, didn't receive an offer from the Longhorns, as a catastrophic knee injury his sophomore year of high school scared off some recruiters.

But Stoops said he knew the Sooners had a special player the moment Perine arrived on campus.

"The first week we were working out and training, and you saw him lift and run," Stoops said. "Then you see that strength and that ability to train and run the way he does, and you see the weights he is lifting and pushing around, you knew how powerful he was."

That power has been the backbone of the Oklahoma offense most of the season. Perine entered the week leading the Big 12 with 1,001 yards rushing and 14 touchdowns. He ran for 213 yards and three touchdowns in Oklahoma's 42-30 win at Texas Techlast weekend.

But Perine saved his best performance yet for Saturday. After lightning delayed the start of kickoff by an hour and a half, Perine took his first carry 49 yards for a touchdown. He added four more touchdowns, and broke Greg Pruitt's 43-year-old Oklahoma single-game rushing record of 294 yards on the Sooners' third possession of the third quarter.

"It's easy to block for somebody like that," Oklahoma offensive tackle Tyrus Thompson said. "You know if you create the hole, he'll find it."

Perine first won over his offensive linemen when he ordered them pizzas the day after he ran for 242 yards and four touchdowns at West Virginiain September. His offensive line returned the favor Saturday by paving the way for the record showing.

"We're thinking Popeye's chicken," said Thompson, when asked what Perine might get the linemen to eat this time.

But while Thompson and his offensive line cohorts were noisily celebrating the record in the interview room well after the game, Perine seemed reluctant even to discuss it. He added he didn't even realize he actually had broken the record until he reached the sideline.

"Not until I saw my teammates clapping and shouting," he said. "It was a great feeling, I guess. I really didn't think much of it. It was obviously a great thing for the team."

Despite its magnitude, Perine said he wouldn't be reflecting much about the record later Saturday night, either. 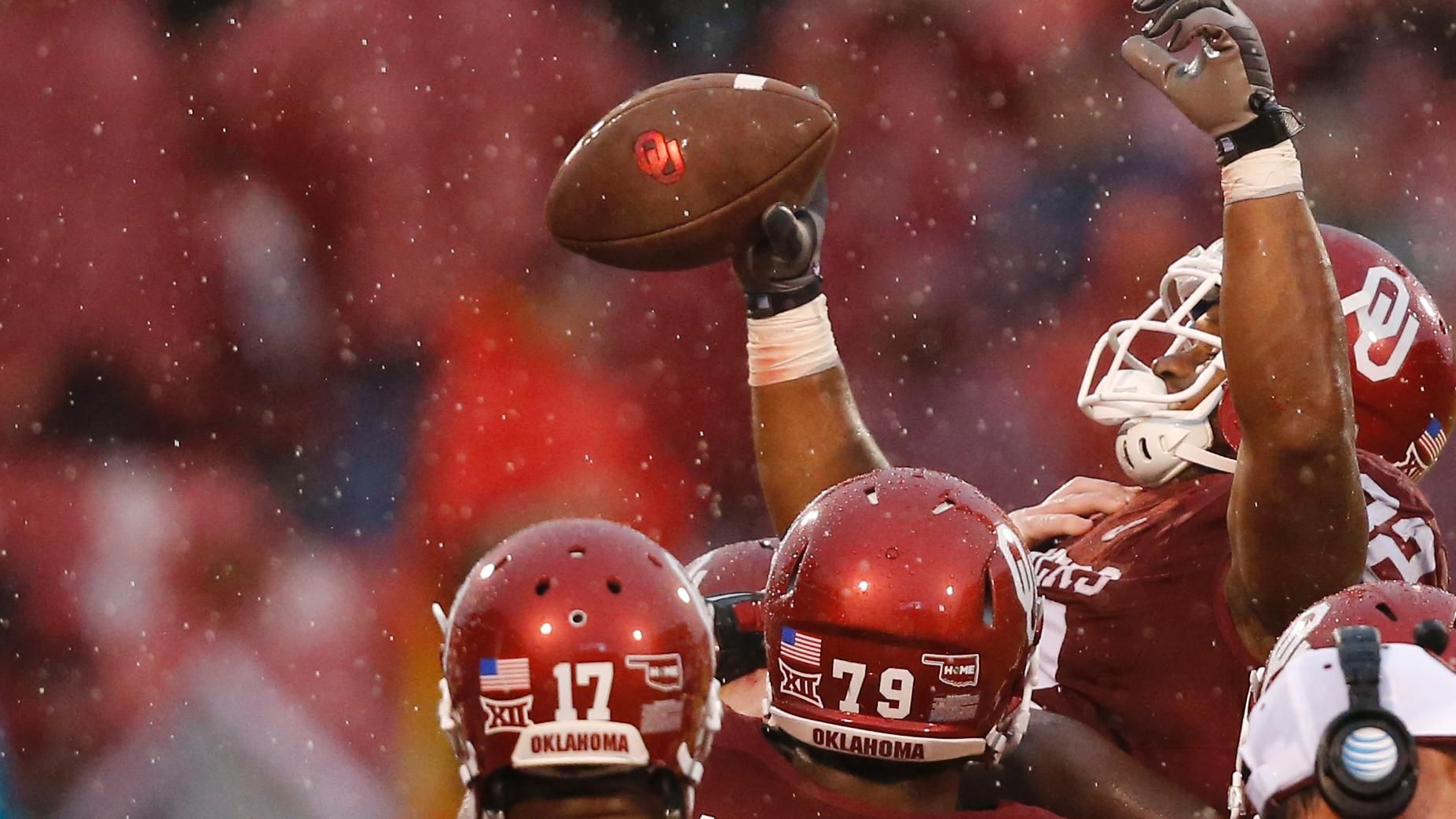