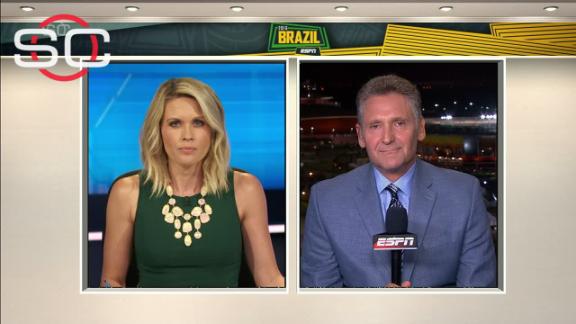 American swimmers Ryan Lochte and Jimmy Feigen could still face serious charges, but Rio de Janeiro civil police chief Fernando Veloso told ESPN on Thursday that the investigation is continuing into what happened early Sunday morning at a gas station outside of Rio.

Veloso also told ESPN that Feigen was being interviewed at an undisclosed location late Thursday afternoon. Later in the day, Olympics teammates Jack Conger and Gunnar Bentz checked in to a flight out of Brazil after a judge lifted the order seizing their passports and keeping them in the country. They had testified about the incident earlier in the day, and Brazilians chanted "liar'' as they left the police building.

"They did not lie in their statements. They never lied to journalists. They only stayed quiet. They did not know what was going on,'' attorney Sergio Riera said.

Feigen, the last swimmer in Rio, provided an updated statement to police, U.S. Olympic officials said, and hoped to get his passport back shortly to return home.

Brazilian authorities are still hoping to hear again from Lochte, but may have to involve the FBI to facilitate such an interview, according to ESPN's Mark Schwarz.

ABC News reported earlier that Lochte and Feigen had been indicted, citing the Federal Police of Brazil. Veloso told ESPN that no indictments have been issued.

If any charges are to be recommended, they would come at the end of the investigation.

The latest twist comes after Brazilian police said four American swimmers were not robbed at gunpoint at a gas station as they claimed.

Lochte has maintained that he and his teammates were robbed at gunpoint at a gas station in a Rio suburb after returning from a night of partying.

"No robbery was committed against these athletes. They were not victims of the crimes they claimed," Veloso said during an afternoon news conference Thursday.

Veloso said the four swimmers vandalized the bathroom on the side of the gas station, damaging mirrors and other property. He said surveillance video shows employees of the gas station tried to control the situation but that the swimmers went to their taxi and tried to get away.

When employees realized what was going on, security guards asked the taxi driver not to leave and to wait for police. Although Brazilian police had said previously that no guns were involved in the incident, Veloso said security officers at the gas station did use guns to control the situation. The surveillance video does show a man approaching the taxi with an object in his hand, but it's not clear whether it is a gun.

Veloso said the gun involved was a legal weapon used by the security guard.

Veloso said the athletes refused to wait for police to arrive. During that time, a third person offered to interpret and explained to the athletes that they had to pay for what they had done to the bathroom. According to Veloso, they offered to pay in the form of a $20 bill and 100 reals (about $51).
Related topics:
sportsespnswimmingjack congerjames feigengas stationolympic sportscivil policeryan lochterio de janeiroriopassportsus swimminggunnar bentz
Copyright © 2021 ESPN Internet Ventures. All rights reserved.
TOP STORIES
Texans asked to conserve power use amid near-record highs
Family suing ambulance company after crash kills woman
Witness recalls chasing driver who hit and killed cyclist
Bill forms off East Coast, 'high chance' low in Gulf develops
Near record heat Tuesday; tropical low in Gulf could bring relief
Computer network issues cause delays for 3 major airlines
Plan ahead! Both US-59 to I-610 ramps are now officially closed
Show More
Man injured in NW Houston hit-and-run taken off life support
Tips for using ceiling fans to cool your home this summer
Jack Yates' great-granddaughter talks 'father of Black Houston'
Couple returns from trip to find truck was stolen and taken apart
2nd suspect in Austin mass shooting now in custody, police say
More TOP STORIES News