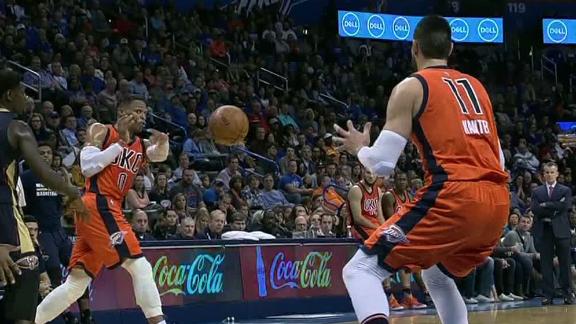 OKLAHOMA CITY -- Russell Westbrook notched his fifth consecutive triple-double -- the longest streak of his career and the NBA's longest since Michael Jordan's seven straight in 1989 -- in the Thunder's 101-92 win over the New Orleans Pelicanson Sunday.

"I just play, honestly," Westbrook said. "I don't want to get into a conversation if I'm going to do it every night. I just want to go out and compete at a high level, like I've been doing since I've been in the NBA."

Westbrook had his triple-double, his 10th of the season and the 47th of his career, by the middle of the third quarter and finished with 28 points, 17 rebounds and 12 assists. (Technically, it was a quadruple-double, as he had 10 turnovers as well.)

Now 21 games into the season, Westbrook continues to average a triple-double -- 31.0 points, 10.8 rebounds and 11.3 assists. He is the first player since Oscar Robertson in 1963-64 to accomplish the feat this late into the season.

"I think the worst thing you can do is take him for granted or take what he's doing for granted," Thunder coach Billy Donovan said. "I would say this: He's creating a norm for himself, and I think in creating that norm, what you don't want to do is take it for granted, and I think it speaks to how he can impact a game of basketball."

Westbrook has 10 triple-doubles this season; the rest of the NBA has combined for 11. The Thunder are 8-2 in games in which Westbrook records one.

"I just like to win, brother. Honestly," Westbrook said. "That's the most important part. Making sure everybody is good, making sure my guys are happy with their games, and make sure we win the game."

With the win Sunday, the Thunder improved to 13-8 and not coincidentally have won five straight during Westbrook's triple-double stretch. During the streak, Westbrook is averaging 28.6 points, 14.4 rebounds and 13.8 assists.

"I don't think I have any word to describe him, man. [English] is my second language. I don't think there's any word to describe his play," Thunder centerEnes Kanter said. "He's doing an amazing job. He's not just making himself better, but he's making everybody else better around him. That's what a really special player does. He's not worrying about his stats; he's worrying about everybody's stats. And he's making sure we're winning games. He's just an unbelievable player."

The Thunder withstood another massive line from Anthony Davis, who finished with 37 points and 15 rebounds.

"He can't beat us just by himself," Kanter said. "That's what a really special player does, look at Russell. Getting his stats, but making everybody else better. With them, he's done a good job. I don't want to say nothing bad about him. He's a good player. That's it."

Sunday's game marks the third time Westbrook has hauled in more than 15 rebounds in a contest this season. A point guard, Westbrook is ninth in the NBA in rebounds per game this season.

"Just grabbing the ball before the other team does," Westbrook deadpanned when asked why he has had such a jump in rebounding this season.

Westbrook is actually an assist and two rebounds away from nine consecutive triple-doubles.

"You say, 'Well, who is he like?' I don't know of another player in the league that you could really compare him to," Gentry said. "I don't know a lot about baseball, but I would say [averaging a triple-double] is probably a lot like hitting .500 for a month."

Westbrook channels his inner MJ with five straight triple-doubles
Russell Westbrook records his fifth consecutive triple-double, the first player to do that since Michael Jordan in 1989.