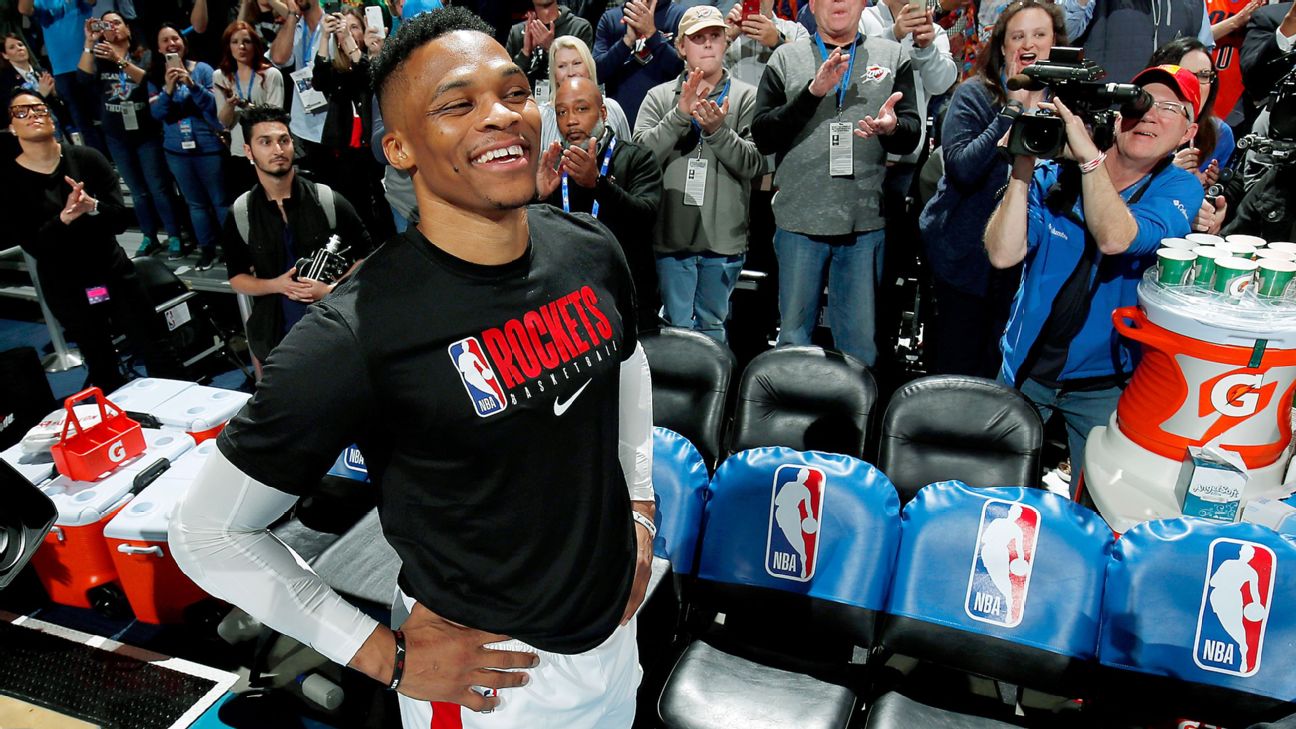 OKLAHOMA CITY -- The Oklahoma City Thunder had never before played a tribute video for the return of a former player. But Russell Westbrook is certainly unique.

The video played before the Houston Rockets' starting lineup was introduced Thursday night at Chesapeake Energy Arena. Deafening cheers and a familiar chant drowned out the introductions of the other Rockets starters.

"MVP! MVP! MVP!" the fans roared after Westbrook sprinted from the Rockets' bench to the opposite sideline, gestured toward the crowd and then held one finger up in the air as his Houston teammates surrounded him near the free throw line.

"Man, some things you can't put into words, just because I've been here so long, so many great memories, great people," Westbrook said. "Obviously, the best fans in the world, because they come with it, and tonight they came with it.

"The organization, Sam [Presti], Mr. [Clay] Bennett, they do an amazing job of just making you feel home. And I felt like I was home."

The cheers from the sellout crowd began even before the tribute video, which featured a variety of Westbrook highlights; fiery, on-court celebrations; clips of his community involvement; memorable Instagram posts; and famous quotes from his remarkable run as the Thunder's point guard.

Westbrook also followed his former routine as he stepped onto the floor for the opening tip, dapping up the Thunder's employees at the scorer's table before firing an imaginary arrow into the upper deck and sprinting to the corner and working the crowd into a frenzy again.

"That was dope. Obviously, we got smacked, but it was a dope environment," said Rockets star James Harden, who spent the first three seasons of his career as the Thunder's sixth man before being traded to Houston. "Oklahoma City, as usual, showed mad love to Russell and everything he's done for those 11 years he was here. Obviously, an unbelievable fan base, and it was just a beautiful thing to see."

The Thunder and the franchise's fans also gave Paul George a warm welcome when he returned to Oklahoma City with the LA Clippers earlier this season, showing pictures of him on the arena big screens as the crowd applauded. It was a stark contrast to the venomous atmosphere forKevin Durant's return with the Golden State Warriors.

The reception for George, who pushed for a trade to the Clippers after two years in Oklahoma City, was polite. The reception for Westbrook, whose ensuing trade to Houston for Chris Paul and future first-round picks was more of a mutual decision, was passionate.

Westbrook walked into the arena as a visitor for the first time, wearing a black T-shirt from his clothing line that read "ZERO REGRETS" across the chest. On the back, there was a list of statistics from his Oklahoma City tenure, with "1 TEAM" at the top, his Thunder totals of 11 seasons, 821 games, 28,330 minutes, 18,859 points, 6,897 assists, 5,760 rebounds, 138 triple-doubles, eight All-Star appearances, one MVP and "0 REGRETS" circled at the bottom.

Those same phrases and statistics were on the special-edition Jordan WhyNot Zer0.3 shoes Westbrook wore during the game. The shoes were black and accented by the Thunder's orange and blue, and also had "THANK YOU" among the lettering.

"I don't regret one thing being here in Oklahoma City," said Westbrook, who had a game-high 34 points on 14-of-26 shooting in the loss. "I don't regret signing back. I don't regret staying here. I don't regret anything that I did here. I feel like I left everything out on the floor every single night and did what I could for the city."

The mutual love continued postgame. Westbrook exchanged hugs and handshakes at midcourt with ex-teammates such as Steven Adams, Terrance Ferguson and Dennis Schroder, as well as young Thunder star Shai Gilgeous-Alexander, who was the centerpiece of the return in the George trade.

Westbrook then made his way toward the baseline by the Thunder bench, smiling and playfully interacting with Thunder coaches and support staffers before hugging Bennett, the franchise's majority owner.

Westbrook stopped again on his way back toward the visitors tunnel, hugging and chatting with Paul, who has led Oklahoma City to a surprising 22-16 record.

"The energy was amazing -- our first nationally televised game and Russ being back," said Paul, whose 18-point, 6-rebound, 5-assist, 4-steal performance was highlighted by dribbling between Rockets reserve center Isaiah Hartenstein's legs before hitting a floater for his final basket. "The crowd is always great, but we knew it was going to be a different energy tonight with Russ' first game back here. You have to get excited."

The fans remaining from the sellout crowd -- many wearing Westbrook jerseys or the T-shirts from his clothing line -- gave him one final standing ovation as he walked off the floor, his right index finger pointed toward the rafters again.

"It's special," Westbrook said. "It's a very, very special thing that meant a lot to me, honestly. Coming back here, just making me feel that I was very, very appreciated." 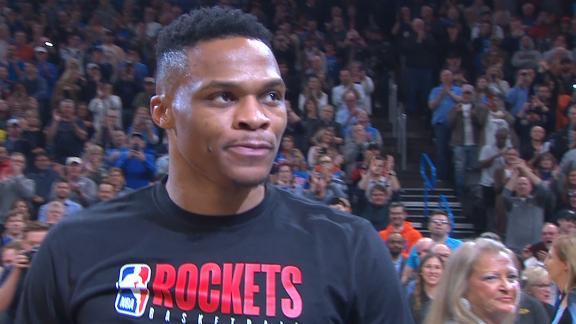 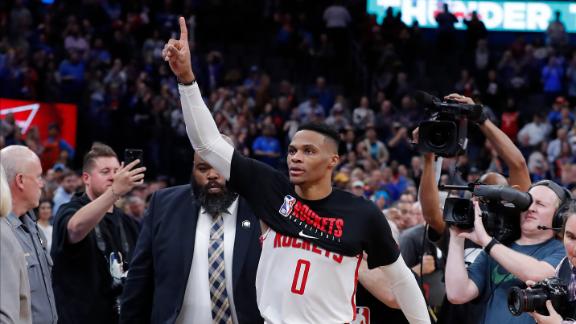