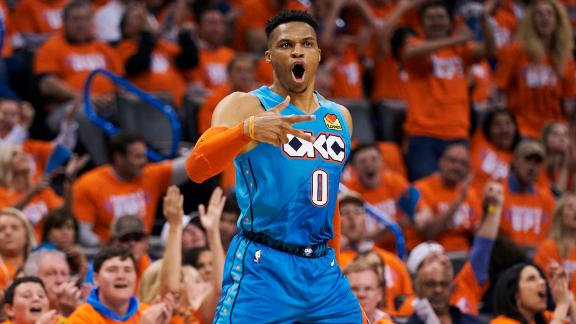 He was part of the inaugural team in Oklahoma City that went 23-59, then rose along with Kevin Durant as dual stars as the team peaked with an NBA Finals appearance in 2012. When Durant left four years later, Westbrook became the predominant face of the franchise and further endeared himself to Thunder fans when he signed a contract extension in 2017.

Thursday night, for the first time, Westbrook returns to Chesapeake Energy Arena as a visitor when the Houston Rockets visit the Thunder.

"Obviously, it's going to be different, No. 1," Westbrook told reporters recently. "But just overall, obviously that place is always going to be special to me because I grew up there. I spent a big part of my career there, met a lot of people there, good organization, great people, nothing but great things come from me being there."

The last time Oklahoma City hosted a former longtime star was when Durant returned in 2017 with the Golden State Warriors. He was booed relentlessly and there was no official recognition of Durant's time with the Thunder.

Before Thursday's game, Westbrook will be honored with a video tribute.

"Russell was a catalyst for a lot of incredible moments and memories for our fans, but it is his relentlessness, longevity and commitment that defines his legacy in Oklahoma City," Thunder general manager Sam Presti said in a statement ahead of Westbrook's return. "It's going to be a unique moment when he steps back on the Chesapeake floor, a chance for people to recognize someone that will always figure prominently into the history of our city."

Westbrook has missed the second night of each of the Rockets' first four back-to-back games this season.

But Westbrook altered his schedule to play the Rockets' first visit to Oklahoma City, instead missing Wednesday's win in Atlanta.

The game has plenty of intrigue beyond Westbrook's return to Oklahoma City.

The Thunder have won six of their last seven and 15 of their last 20 to climb firmly into the Western Conference playoff picture.

A big part of that is Chris Paul's play at point guard. Over the last 20 games, Paul is averaging 17.1 points and 7.2 assists per game.

As importantly, though, Paul has played a big role in bringing along the Thunder's rebuilt young core, most notably second-year guard Shai Gilgeous-Alexander.

"He's been a hell of a closer for us," Thunder forward Abdel Nader said after Tuesday's win in Brooklyn to close out a 3-1 road trip. "We trust him 100 percent. He's one of the main reasons why we're doing well like we are right now."

Houston comes into Thursday's game on a three-game winning streak.