Rockets' Trevor Ariza accepts responsibility for ban: 'It is what is is' 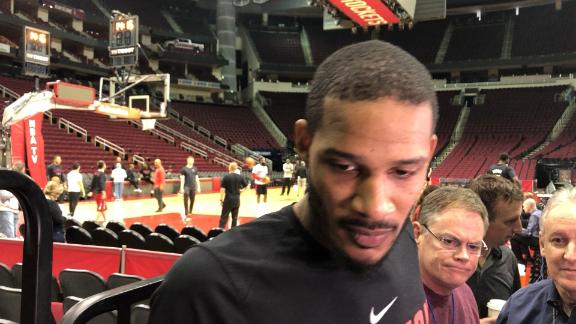 HOUSTON -- Houston Rockets forward Trevor Ariza accepted responsibility for his actions that led to a two-game suspension, but he declined to discuss whether he hashed out his issues with LA Clippers guard Austin Rivers.

Ariza and teammate Gerald Green were suspended two games after a league investigation determined they "entered the Clippers' locker room immediately after the game and engaged in a hostile, verbal altercation with several Clippers players."

Sources said Rivers was the primary player that Ariza, who was ejected late in Houston's heated loss, wanted to confront.

"I take responsibility for what I did. That's it," Ariza said before Friday's practice, the first time he talked to the media since the suspension was announced. "... It is what it is. Not gonna cry about it, not gonna whine about. Just move on and look forward to when I can play again."

Rivers, who talked trash to Ariza from the Clippers' bench while wearing a suit and a protective boot due to an ankle injury, told ESPN's Ramona Shelburne that he hashed out his issues with Ariza during a 35-minute phone call.

"First and foremost, me and Trevor have no problems," Rivers said. "He called me. He reached out to me. Trevor and I talked and hashed everything out. He was really cool about being the bigger guy and calling me."

Ariza declined to confirm that he had a phone conversation with Rivers, rolling his eyes and groaning when the subject was broached.

"Well, if I did or whatever happened, that was between me and that person," Ariza said. "I don't really talk about anything I talk about with other people. Whoever I talk to or about, I do it directly with them and not everybody else. So you're not gonna get nothing about the conversation from me or whatever the case may be."

Ariza's confrontation with Clippers star Blake Griffin, which resulted in double technical fouls and the ejection of both players, began when Ariza responded to trash talk from Rivers.

"I like to think that I respect everybody," Ariza said. "I like to think I just play the game and go on about my business. I kind of expect the same thing, especially if I'm not [going] at anybody else."

Sources told ESPN that the situation escalated after the game when Ariza, standing in the back hallway between the locker rooms, heard Rivers profanely badmouthing him from inside the Clippers' locker room. An enraged Ariza then barged into the Clippers' locker room through a back door with Green in tow; the league investigation concluded that Rockets stars Chris Paul and James Harden followed to act as peacemakers.

The Rockets return to the Staples Center to face the Clippers on Feb. 28.

"I got my punishment and I want to move on and move forward and don't care about anything else," Ariza said.