Rockets set franchise record for most wins in a season, couldn't care less 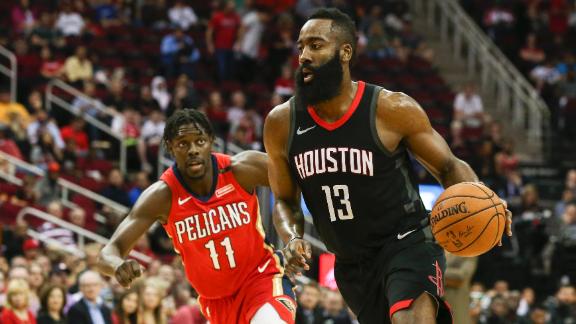 HOUSTON -- Rockets coach Mike D'Antoni stood in the middle of Toyota Center's home locker room Saturday night and congratulated his team for breaking the franchise record for wins in a regular season. The Rockets didn't exactly erupt in celebration.

"They didn't care," D'Antoni said after the Rockets improved to 59-14 with a 114-91 win over the New Orleans Pelicans. "I'm kind of happy. I thought it was nice. They absolutely did not care."

It has been a heck of a regular season in Houston. The Rockets broke their franchise record for wins with nine games to go. They have essentially locked themselves into the top overall seed, holding a 4-game lead and the tiebreaker over the wounded Golden State Warriors. The Rockets have accomplished everything they planned to this point.

"It's a good team accomplishment in the regular season, but we've got bigger goals than that," MVP front-runner James Harden said after his 27-point, six-rebound, eight-assist performance against the Pelicans. "So it's just a step to where we want to go."

Chris Paul didn't come to Houston to celebrate regular-season milestones. From the moment Paul succeeded in pushing for a trade from the LA Clippers, the Rockets accepted championship-or-bust terms.

The Rockets' regular season has been as successful as anyone possibly could have envisioned. That's the case even with injuries sidelining Paul for 20 games, including the past two, as the team errs on the side of caution with the veteran point guard nursing some minor soreness in his left hamstring.

The Harden-Paul partnership has produced a historically elite offense, a whole bunch of smiles and none of the friction anticipated by those skeptical of two ball-dominant stars playing together. But the silence from those skeptics would transform to a deafening roar if the Rockets don't make an extended playoff run.

A trip to the Western Conference finals -- or a round further than Paul has ever been in his career -- is the bare minimum for the Rockets to avoid ridicule. Putting up a good fight against the defending-champion Warriors would be enough to earn respect from any rational basketball mind.

But that sure wouldn't be satisfying for the Rockets.

The Rockets have proved to themselves that they're as good as they believed they could be, that this is a team capable of claiming the franchise's third NBA championship.

Houston general manager Daryl Morey did a phenomenal job of surrounding his superstars with quality role players who fit like puzzle pieces.

The summer signings of versatile forwards PJ Tucker and Luc Mbah a Moute have been critical in Houston becoming a top-10 defense, which the front office and coaching staff considered a requirement to evolve into a championship-caliber team. Eric Gordon and Ryan Anderson, the shooters who signed with the Rockets the previous summer, are part of the machine en route to shattering all the NBA 3-point records that Houston set last season.

And Clint Capela, the homegrown 23-year-old center, has developed into a legitimate third star. He had one of his best performances in the blowout of the Pelicans, stuffing the box score with 18 points, 16 rebounds, a career-high-tying six blocks and three steals; it's a line that hasn't been seen in Houston sinceHakeem Olajuwon's heyday.

That sort of night from Capela isn't a surprise at this point, as he's a consistent double-double threat (14.1 points and 11 rebounds per game) whose energy and above-the-rim ability on both ends of the court serve as a perfect complement to the savvy and skill of the Rockets' superstar guard duo.

That's all fine and dandy, but the real fun doesn't begin until the playoffs open in mid-April. Nor does the real pressure.

"That's good that they don't care," D'Antoni said, referring to the Rockets' lack of reaction to the franchise wins record. "They want it all. ... They know what's at stake, and they know what we need to do. They know what we'll be judged on in the playoffs."

It's a shame for the Rockets that they can't just fast-forward to the postseason. There's really nothing left to accomplish in the final nine games of the regular season. The priority will be getting to the playoffs as healthy as possible, meaning they'll be careful as Paul and Mbah a Moute (knee soreness) deal with minor injuries. Other core veterans will get some rest, including Harden, whether he likes it or not.

The biggest challenge for the Rockets down the stretch of the regular season will be staying sharp while making health the priority.

"The edge is already going to be there no matter what," said Harden, who might have more to prove in the playoffs than any NBA star, considering his miserably disappointing finish during the Rockets' 39-point season-ending loss to the San Antonio Spursin Game 6 of the2017 Western Conference semifinals. "We haven't done anything. We don't have time to relax. The No. 1 seed is cool and all, but we've got bigger things to worry about. We don't have time to relax or take deep breaths."

Rockets cruise, set franchise record for wins in season
James Harden scores 27 points while Clint Capela records 18 points and 16 rebounds and Houston beats New Orleans 114-91 for the Rockets' 59th win of the season, the most in franchise history.