Rockets one win away from advancing with win over Mavs 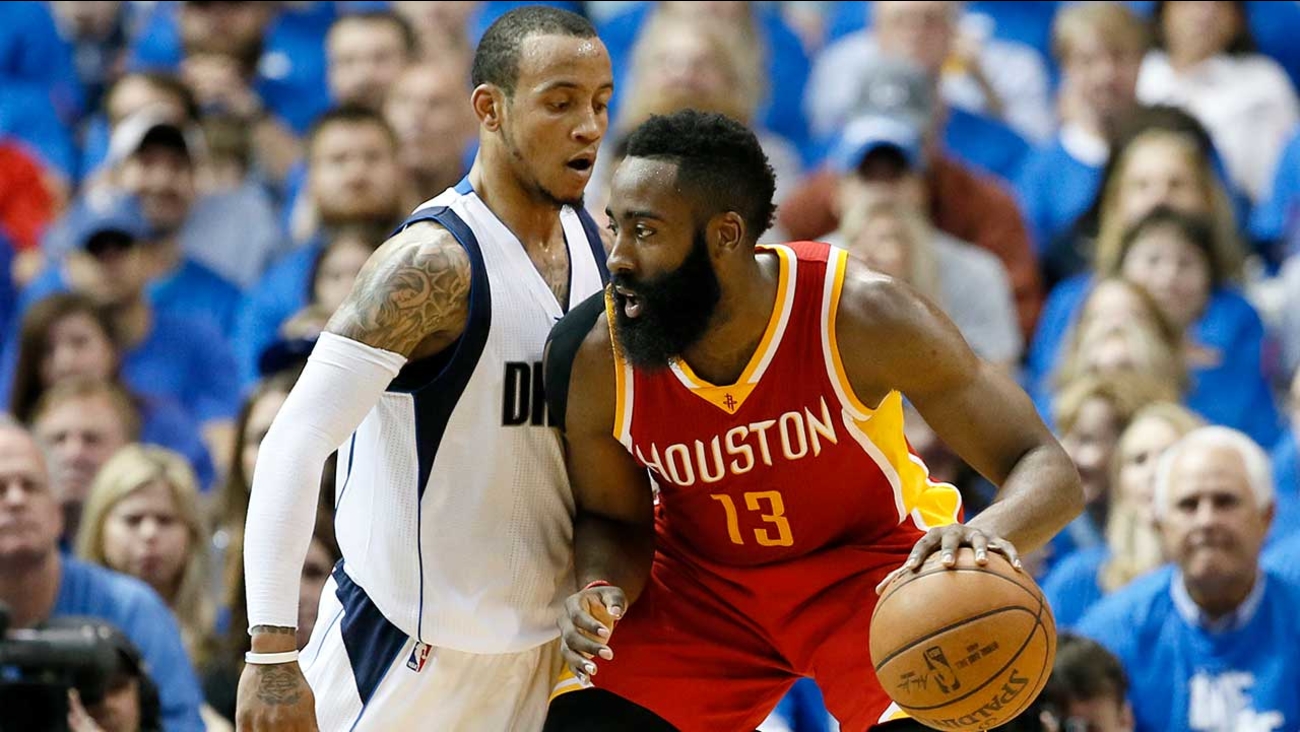 Dallas Mavericks' Monta Ellis, left, defends as Houston Rockets' James Harden (13) looks for an opening to the basket in the second half of Game 3

DALLAS, TX -- James Harden scored a playoff career-high 42 points, Dwight Howard had his postseason best with 26 rebounds and the Houston Rockets beat the Dallas Mavericks 130-128 on Friday night for a 3-0 lead in their first-round series.

The MVP candidate played a dominating role after deferring to Howard and role players in the first two wins, putting the Rockets on the verge of their first playoff series victory since Howard joined Harden two years ago.

But Ellis missed a potential tying jumper just before the buzzer, leaving Dallas to face a fourth straight year without winning a postseason series since taking the franchise's first championship.

Game 4 is Sunday at Dallas. No team has ever rallied from a 3-0 deficit to win an NBA postseason series.

Harden set his playoff career high and hit 40 points with a three-point play on a layup after Dallas had cut an 11-point fourth-quarter deficit to one.

After Harden fouled Nowitzki on a 3-point attempt and the big German hit all the free throws, Harden hit a jumper over Tyson Chandler. The ball rattled off the rim, hit the backboard and dropped back in for a 129-126 lead with 12.7 seconds remaining.

The Mavericks had one more chance, trailing by two with 6.7 seconds left, but Ellis wasn't close, missing to the right of the rim.

More concerned with protecting the rim after Howard and Josh Smith combined for five dunks off alley-oop passes in a key run in Game 2, the Mavericks let Harden have his shots. He found a rhythm and did most of his damage without his normal load of free throws, making 15 of 24 from the field.

Howard had 14 of Houston's 23 rebounds in the first half and helped on the offensive end in the fourth quarter, getting seven of his 13 points.

When Dallas focused on slowing Harden in the second half, Corey Brewer hit two corner 3s and scored 13 of his 15 points. Harden had nine assists, including a nifty pass for an easy dunk by Smith, who had 18 points.

The Mavericks were playing without Rondo two days after coach Rick Carlisle said he had a previously undisclosed back injury while acknowledging that he didn't think Rondo would play for Dallas again. The announcement came after Carlisle benched Rondo for almost the entire second half of Game 2.

Dallas trailed by 12 points in the first quarter and 11 in the fourth before Nowitzki brought the Mavericks back with 16 fourth-quarter points in in his highest-scoring playoff game since the final game of Oklahoma City's first-round sweep in 2012.

Rockets: Harden's previous career playoff high was 37 against Portland last year. Howard's previous best in rebounds was 24 in a first-round series against Philadelphia in 2009, when he led Orlando to the NBA Finals. ... Howard acknowledged trash talk from a fan in the first row during a break in the second quarter, saying "That's the best you got?"

Mavericks: PG Raymond Felton made his first playoff start since May 18, 2013, for the New York Knicks in a Game 6 loss to Indiana that sent the Pacers to the Eastern Conference finals. It was his fourth start of the season for the other piece in the trade that brought Chandler to Dallas. ... Ellis' previous playoff high was 29 points twice.