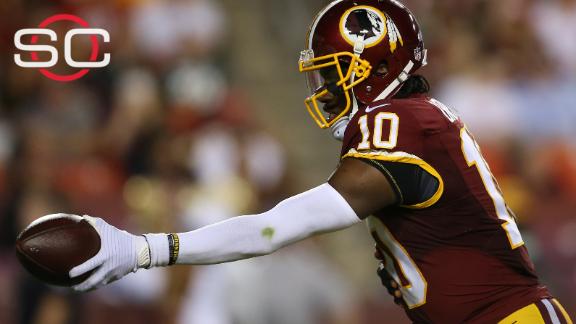 ASHBURN, Va. -- Redskins quarterback Robert Griffin IIIwas unable to provide any clarity on when, or if, he suffered a concussion in Washington's Aug. 20 preseason game against Detroit.

In his first public comments since leaving that game because of a head injury, Griffin referred all questions about the situation to the team, which has maintained that he indeed had a concussion.

"Talk to the people who report that stuff," Griffin said. "I was in the locker room taking a shower getting ready to watch the rest of the game, so I don't know.

"I'm following [the team's] lead, following their protocol, and hopefully I can get out there and play."

The Redskins and Griffin have proceeded as if there was a head injury. Griffin met with a neurologist Thursday, who cleared the quarterback to play in Saturday's preseason game against theBaltimore Ravens. Because Griffin had suffered twoprevious concussions, the team wanted him to visit a neurologist to make sure there were no residual effects.

"That's why we're being cautious and I'm being cautious," said Griffin, who has participated fully in each practice since that game. "Going to see the doctors and taking a thousand tests because it's about my family and my long-term health. That would have been my third [concussion]. Just be as cautious as possible; hopefully I get a chance to go out and play the game I love."

Griffin took a number of hard shots against the Lions, getting hit six times in eight dropbacks during his four series of work. He was sacked three times. On his last play, Griffin ran up in the pocket, lost the ball and had a defensive lineman fall on him. But he wasn't sure whether that's the play that caused a head injury.

"I have no idea," Griffin said. "I just know I was in some pain, the trainers came out and that was it."

But he returned to practice Sunday, taking part in full-team work, and hasn't missed any time the past three days.

"I feel good, just trying to take care of everything and be as cautious as possible," Griffin said. "It's not about anything but my family and them caring for me and my well-being. My teammates care about me and are asking about me every day. I'll just follow the protocol and see what happens."

Griffin did not second-guess the decision to have him play a fourth series, after he had taken a number of hits in his first three.

"That's the coach's decision," Griffin said. "As we like to say, I just work here, man. I just want to go out there and every opportunity that I get, just try to execute the plays like they need to be executed, make a play when I have an opportunity and let the coaches do the rest of that."