Rick Barnes out as Texas coach 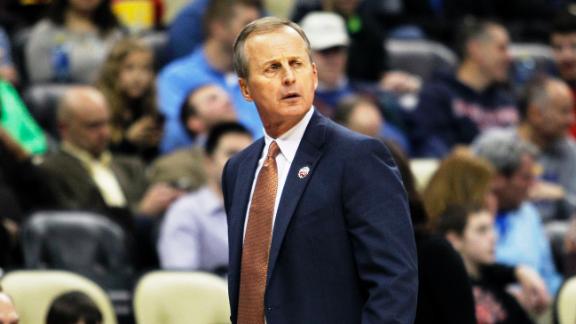 Texas athletic director Steve Patterson informed Barnes that his tenure is over, a source told ESPN.

Patterson would not confirm Barnes' firing when reached Saturday.

"I'm currently in Iowa for the NCAA swimming and diving championships," Patterson said. "Our conversations are still ongoing."

Two coaches interested in the Texas opening and who will be in the mix to replace Barnes are Wichita State's Gregg Marshall and VCU's Shaka Smart, according to sources.

One source said Patterson also could go for an outside-the-box hire with NBA ties. Patterson has NBA connections as a former executive with the Houston Rockets and Portland Trail Blazers.

Barnes, 60, went 402-180 during his tenure in Austin. He won three Big 12 regular-season championships and reached the NCAA tournament in each of his first 14 seasons there. Under his direction, Texas reached the Final Four in 2003 and made two other Elite Eight appearances. The Longhorns were ranked No. 1 in the country for the first time in school history during the 2009-10 season.

National players of the year T.J. Ford and Kevin Durant were coached by Barnes at Texas, as was four-time NBA All-Star LaMarcus Aldridge.

Barnes was thought to be on the hot seat heading into the 2013-14 season, but a 24-11 record and NCAA tournament appearance won him an extension. With several key players returning and the addition of five-star center Myles Turner, Texas was picked by some to win the Big 12 this season and was ranked No. 10 in the preseason Associated Press poll.

However, the Longhorns backed their way into the NCAA tournament before getting bounced in the round of 64. They finished 20-14 overall and 8-10 in the Big 12 -- tied for sixth in the league standings.

Before taking over at Texas in 1998, Barnes was the head coach at Clemson for four seasons. He went to the NCAA tournament in his final three seasons with the Tigers, reaching the Sweet 16 in 1997. Barnes previously was the head coach at Providence (six seasons) and George Mason (one season).

He also spent time as an assistant coach at Ohio State, Alabama, George Mason and Davidson.

Barnes received a two-year contract extension after last season that ran through the 2018-19 season. A clause in the coach's contract, which had a base pay this season of $2.55 million, calls for a $1.75 million buyout if he is fired before April 1, according to the Austin American-Statesman. The payout would have decreased to $1.5 million on Wednesday.

Texas Fires Rick Barnes After 17 Seasons
Jeff Goodman breaks down Texas' decision to fire Rick Barnes and whom the Longhorns may target to replace him.

The Longhorns' Tradition Of Winning It All
John Saunders breaks down Texas' decision to fire head coach Rick Barnes after 17 seasons.

Butler Outlasts Texas
Eamonn Brennan discusses No. 6 seed Butler's 56-48 win against No. 11 seed Texas in the Round of 64.