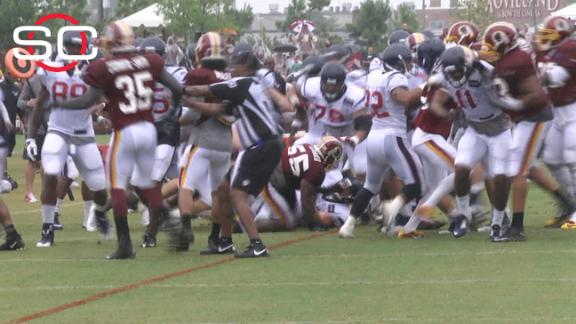 RICHMOND, Va. -- The Washington Redskins and Houston Texans ended their three-day practice Saturday with a major brawl, having to be separated on multiple occasions and forcing an early end to their joint work.

There were minor skirmishes on the two fields, but both sides quickly escalated to a major one within several plays an hour into practice.

Players sprinted in from the sidelines, punches were thrown, bodies were tossed to the ground and players on each team congratulated themselves for sticking together. After the last round of fights, the coaches pulled their respective teams together and, after a quick talk, the Redskins and Texans practiced on separate fields.

The Redskins players blamed Houston for starting the fight.

"They came out here trying to be tough guys today, but it didn't work," Redskins defensive lineman Chris Baker said.

The Texans, meanwhile, said they weren't going to back down.

Redskins cornerback DeAngelo Hall, who did not practice the past two days, said a Texans coach told him some bad feelings stemmed from a hit Friday. Running back Matt Jones ran over Texans cornerback Kevin Johnson at the end of a run, firing up the Redskins' sideline.

"He either needs to get his weight up or get out of the way," Hall said of Johnson.

Johnson went low on a tackle of Redskins fullback Jordan Campbell on Saturday. Some of the Redskins took offense and ran over to Johnson, and the situation deteriorated from there.

A minute later on the other field, rookie Texans running back Kenny Hilliard lowered his shoulder and ran over a Redskins player. The teams had been jawing at each other for some time before that.

One of the fights also featured Baker and Texans center Ben Jones.

"The offensive lineman came out and tried to clean me out of the pocket so I asked him what was up," Baker said. "We got into an argument, I took my helmet off and he hooked me with a right hook and we got to fighting."

The Redskins were more vocal about what they felt precipitated the fracas.

"We were in the run game and we feel they were being overly aggressive, so we got aggressive back and things happened," Redskins tight endNiles Paul said.

The fight came on the final day of a three-day practice session -- with nearly 20,000 fans in attendance and ESPN telecasting it live. There was unexpected rain that perhaps added to a tense atmosphere.

"The first two days were outstanding," Redskins coach Jay Gruden said. "It was good work. Going in full pads this day, the rain, the weather, the crowd ... you could see everybody was a little anxious to get the practice in and put a little bit extra in finishing runs. You could sense a little bit, but what happened there you really can't control."

Texans coach Bill O'Brien and Gruden tried to defuse the situation. After the minor skirmishes, Gruden said he hoped tempers would settle down and the teams could continue working.

"It's intense out there," O'Brien said. "It's too bad, but that's just what happens with two competitive teams."

Players from both teams said their respective coaches echoed a similar theme -- they did not like the brawl, but they did like that players stood up for one another.

"They're my teammates and I'm not going to let anybody take advantage of them," said Texans receiver Jaelen Strong, who joined the fight. "Whatever I needed to do to step up and protect my teammates, protect the Houston Texans, that's what I'm going to do."

The Redskins, coming off a 4-12 season, spun this in a positive light, hoping it's an example of togetherness that hasn't always been evident in the past.

"I'm proud of how aggressive we were," Paul said. "Everyone came and had each other's back, even when the defense got into it. We all ran to each other's side. Obviously we can't do that in a game because everyone would get fined and suspended, but we did what we were supposed to do as a team. You could see us coming together."

Watt 'perfectly fine' with brawl
J.J. Watt discusses the brawl that broke out during the Texans and Redskins' joint practice on Saturday.